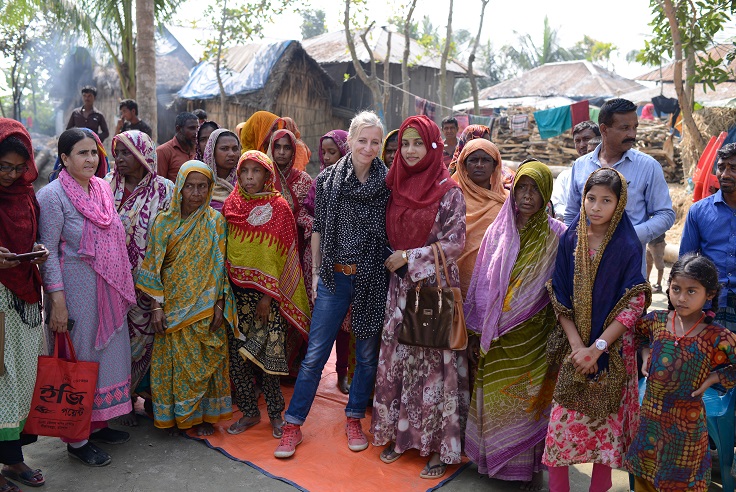 12 million people have been displaced since the start of the Syrian crisis in 2011. Roughly half have found refuge in neighbouring Turkey, Lebanon and Jordan, and a very small number have gone further afield to Europe. But no less than 6 million have stayed behind and are currently displaced inside their own country.

The numbers have now swelled again in the wake of the Turkish attack on the Kurdish-held northern border area of the country.  Nearly 180,000 people are estimated to have been displaced since 9 October from the districts of Al Hasakeh, Al Malikeyyeh, Quamishli and Ras al Ain.  They join the 800,000 more who were displaced in Syria in the first six months of 2019.

The world over, it is the same story. We estimated that by 1 January 2019, over 41 million people worldwide were uprooted within their own countries as a result of conflict. This is almost twice the global number of refugees, and it does not even include the millions more displaced by disasters: 7 million worldwide in the first half of this year alone.

But as the numbers of internally displaced people have been rising, the attention they are given has not.

For a start, the true scale of the problem remains elusive. Data on internal displacement is still inconsistent, mostly due to difficult access, lack of capacity and consistency in reporting, and political sensitivities. Stories of internally displaced people generally feature far less in the world news than those of refugees or migrants.

While there are a set of soft law principles at the global level and a legally binding convention for Africa, no single UN agency has the mandate to respond to internal displacement, which straddles humanitarian and development agendas.  National approaches to the issue have varied from context to context, and been dependent on political will and local capacity.

Sovereignty has often been invoked as the main barrier to progress.  Some governments have not wanted others meddling in their internal affairs, not least when they themselves have been responsible for causing the displacement in the first place.  Too many have invoked ‘sovereignty as immunity’ as an excuse to ignore internal displacement, a situation not helped by it being seen predominantly as a humanitarian issue, or as a violation of human rights.

The result is that the international policy debate has been driven by a handful of committed 'champion states', and not by those with large numbers of internally displaced people.

But there may just be a wind of change now as the world re-evaluates the issue, and states step up to the realisation that it is in their national interest to take the lead in finding solutions to address the immediate humanitarian needs, as well as the longer-term and deeper-rooted development challenges that internal displacement poses.

This is why countries with large numbers of internally displaced people are increasingly coming together, sharing both their commonality and their particularity.  They are squaring up to the numbers, realities and solutions for their citizens uprooted within their own borders, and making them part of their national development plans and strategies.

At the second global internal displacement conference in Geneva earlier this month, there was a new and palpable sense of government responsibility, emboldened by the sharing of best practice and of existing, workable solutions from all over the world.

Iraq told a story of collective compassion as to how 6 million people living in internal displacement in 2014 became nearer to 2 million today.  Georgia shared the experience of its Ministry for Internally Displaced Persons, coordinating a nationwide approach to the displaced who make up over 7% of its population, one of the highest proportions in the world.  Fiji spoke of its inclusive approaches to relocation, and of involving women and children in planning how communities will be forced to move as water levels rise.

Further inspiration came from new and robust national laws in countries like Niger and Colombia, and in stories from as far afield as Kibera in Kenya, Cox’s Bazar in Bangladesh, and Mariupol in Ukraine.  Every success story bore witness to national strategies informed by a local definition of needs, and by the involvement of those displaced and by host communities themselves.

At long last a tide is turning, as the world wakes up to the scale and the risks, but also the opportunities, posed by what has now become one of the biggest challenges of our times.

It can awaken further as we quantify the social and economic cost of internal displacement, and acknowledge that, if left unaddressed, it can put a serious brake on countries' longer-term stability and development.  We continue to help countries collect better data so that they can assess the risk of and prepare for future displacement.

Countries are impatient.  In particular, those facing the existential threat posed by climate change – in the Pacific Islands and elsewhere – are likely to face millions more internally displaced in the future.  Responses will remain State-led, so States are increasingly seeking guidance on how to do all this.

Meanwhile the UN Secretary General has responded to the call of 57 countries – many of them with substantial internally displaced populations – to set up a High Level Panel which can equip countries, and bring the issue to its rightful place on the global agenda.  The shared goal should be ‘sovereignty as opportunity’, and the overarching principle that of listening and respectful dialogue.

There are at least 41 million urgent reasons to rejoice in the fact that the internal displacement challenge is finally coming out of the shadows. Ignoring it would only prolong the agonies of those who, as in Syria right now, are desperately seeking safety and a brighter future.  The solutions to displacement, and the brighter future ahead, will only ever come from within.