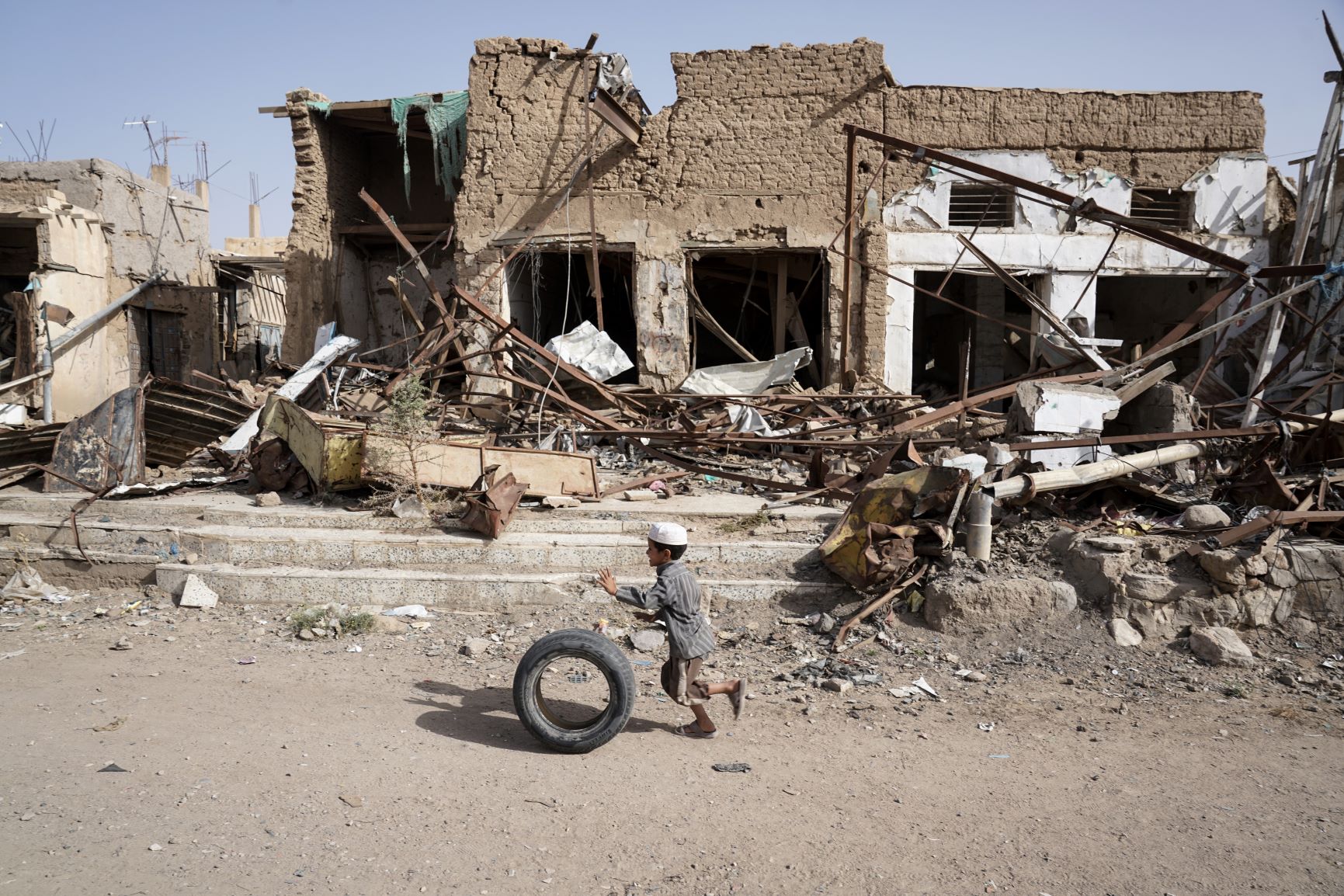 A young boy runs with his tyre past buildings damaged by airstrikes in Saada's Old Town. Up until August 2015, this area was home to Saada's oldest market with thousands of people selling vegetables, spices and fabrics in stores and street stalls. Photo: UNOCHA/Giles Clarke, April 2017

Urban sustainability is a key objective in the 2030 Agenda for Sustainable Development, set by world leaders in 2015 to end poverty, fight inequalities and tackle climate change. Yet, it cannot be achieved if national and local governments continue to overlook the issue of internal displacement. In this blog for World Cities Day, we explore how urbanisation and internal displacement are inextricably linked and must be considered together in order to form effective responses.

In an increasingly urban world, it becomes difficult to disassociate the development of countries from what happens in their urban centres. Cities are often thought of in relation to job creation, more and better access to services, trade and investment. They tend to be seen as places of cultural exchange and economic growth, where development opportunities can benefit millions. While this is true to some extent, cities continue to face a major challenge: they work for some, but not for all.

Over the last three decades, urbanisation has mainly taken place in middle-income countries, boosting their economic development, and therefore wealth. However, that wealth has not necessarily been equally distributed among the population. To illustrate this, recent estimates point at more than a billion urban dwellers living in informal settlements globally. This represents around 13 percent of the world’s population. Urban poverty and a broadening inequality gap are key challenges of our time and can undermine current and future development gains.

Another challenge of today’s urban world is that there is an increasing number of internally displaced people (IDPs) in cities. Driven from their homes by conflict, disasters and development projects, millions of people are shaping urban landscapes as they move from, to, between and within cities. Unsustainable urbanisation also increases the risk of further displacement, by increasing levels of exposure and vulnerability to both urban conflict and natural hazards. From unsustainable returns in Mosul to unresolved disaster recovery in Mexico City, displacement crises are increasingly playing out in cities.

Often, local and national governments find themselves underfunded or understaffed to cope with the challenge. Humanitarian and development actors try to adjust their responses accordingly but complex urban settings require new approaches. Some urban IDPs are difficult to access and at risk of being left behind.

Unfortunately, recent events show little sign of improvement. On 8 October, ground fighting and airstrikes near the city of Al Hudaydah in Yemen forced some 26,000 families to flee towards the city of Sana’a. This is in addition to the more than 142,000 new displacements recorded in the first half of the year. Labelled by the UN as the worst humanitarian crisis in the world, a significant part of the conflict in Yemen is playing out in cities.

In the Libyan city of Tripoli, renewed fighting has forced over 25,000 people into displacement since 26 August, a figure that should be considered a conservative estimate. As with other conflict-affected countries in the Middle-East and North Africa, urban warfare is responsible for most of the displacement.

In Somalia, over 100,000 people fled from rural areas to the capital, Mogadishu, in the first six months of the year, driven by a combination of conflict and sudden and slow-onset disasters. Within the city, unprecedented levels of new displacement were triggered by forced evictions and about 99 percent of the evictees had already been displaced once before. Mogadishu has some of the highest concentration of IDPs on the African continent and internal displacement is contributing to Somalia having one of the highest urbanisation rates in the world. This demonstrates the reciprocal link between internal displacement and urbanisation.

Disasters, too, have wreaked havoc on urban centres in recent months, causing extensive damage and triggering internal displacement. On 28 September, an earthquake and tsunami struck the Indonesian province of Central Sulawesi, causing over 18,000 new displacements in the city of Palu. During the summer, Japan was battered by heavy rains, flooding and the strongest cyclone in 25 years. The cities of Osaka and Kyoto were impacted by a 6.1 magnitude earthquake that triggered over 2,600 new displacements, most of which were planned evacuations. While some people could return quickly after, others remain displaced due to the high levels of damage and destruction.

This list could go on, especially if we consider displacement associated with criminal and gang violence, which is essentially an urban phenomenon, as is the case in El Salvador and Guatemala. Originating in cities, forced displacement in these countries sometimes becomes a cross-border movement, as currently illustrated with the caravan of Hondurans moving towards the United States.

The above examples show us that cities can present serious challenges, as well as opportunities. World Cities Day presents an occasion to have an honest conversation about how internal displacement and urbanisation are both a driver and symptom of each other and must be considered together in order to develop operational and policy responses that will make cities work for IDPs.

We need to think about urban sustainability through the lens of internal displacement and question our assumptions about the phenomenon. We must get better at addressing the data gaps to assess the scale, duration and severity of urban displacement, but also at better understanding how cities are being built and local governance is being structured to cope with this growing challenge. Drivers at the rural level should not be forgotten in such discussions, as rural poverty and lack of opportunity keep pushing people towards cities.

Urban sustainability will be a critical enabler for achieving both the Sustainable Development Agenda and reducing current displacement trends and future risks. Many opportunities to do so lie ahead, and cities will undoubtedly be where the differences will be made. How to seize these opportunities will be the focus of our upcoming Global Report on Internal Displacement.

Banner: A young boy runs with his tyre past buildings damaged by airstrikes in Saada's Old Town. Up until August 2015, this area was home to Saada's oldest market with thousands of people selling vegetables, spices and fabrics in stores and street stalls. Photo: UNOCHA/Giles Clarke, April 2017