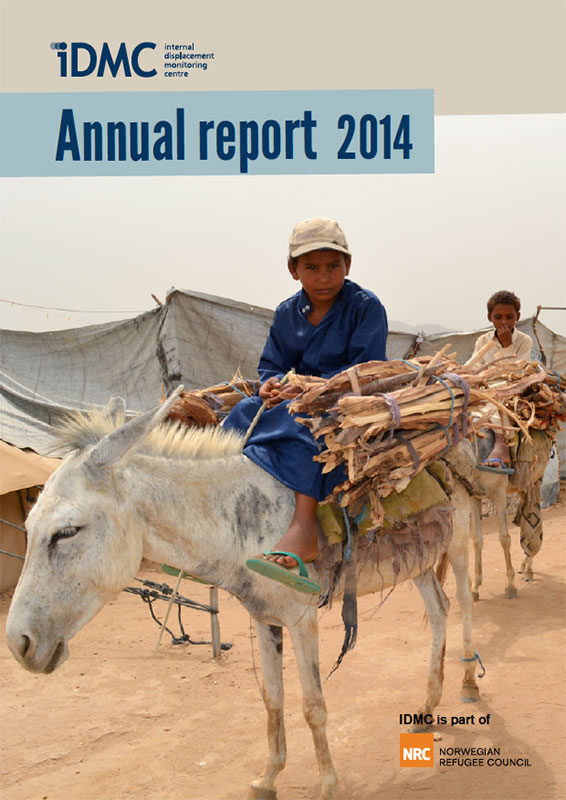 I had the pleasure of joining the IDMC team in 2013, taking the helm from Kate Halff, who after four years of the excellent work and dedicated service, left the organisation in May.

2013 was another year of turmoil for many. Conflicts and disasters worldwide forced millions of people to flee their homes, leaving many stuck in limbo within the borders of their own country.

Relatively new crises, such as those in Syria and the Central African Republic, raged alongside long-standing conflicts in the Democratic Republic of Congo, Nigeria and Sudan, and innocent men, women and children continued to bear the brunt of the violence. We reported the highest ever number of people displaced as a consequence of conflict and violence - a staggering 33.3 million as of the end of year (reported in 2014).

In terms of disasters induced by natural hazards, we closely monitored the displacement fall-out from typhoon Haiyan, which forced more than four million people to flee their homes in the Philippines. We have increasingly been exploring the impact of both conflict and disasters, and the many issues those displaced in such complex situations face, particularly in the Philippines and flood-and-drought-prone African countries.

2013 marked our 15th year of monitoring internal displacement worldwide. Set up in 1998 to provide an information database, today we use our unique depth of knowledge on the issue to provide more analytical, innovative and advanced information, not only on internally displaced peoples’ needs at the local level, but also about how displacement patterns and trends can tell us something wider about the world we live in.

During the year, we continued to develop our cutting-edge work with systems dynamics modelling, a methodology which looks at a wide variety of factors that influence displacement -  such as the interrelated effects of conflict, natural hazards, poverty, food and livelihood insecurity - and capacities to manage them. It also allows practitioners to simulate adjustments to these variables with the aim of preventing displacement from happening in the first place.

Our close collaboration with our parent organisation, the Norwegian Refugee Council (NRC), has allowed us invaluable access to the field, and with their support we sent our analysts on 17 fact-finding and three training missions in 2013. We also conducted a further 27 fact-finding and seven training missions with partners such as the UN Refugee Agency (UNHCR) in countries where NRC was not present.

IDMC’s flagship reports, the Global Overview and Global Estimates, analyse displacement caused by conflict and disasters worldwide, providing key statistics and analysis of trends. As the world’s leading sources of information on internal displacement, they are widely cited by UN bodies and receive significant media coverage.

We publish a significant amount of other new research each year, such as country overviews, briefing papers and blog posts, and we also use our information to influence positive change for people affected by or at risk of displacement, though much of this work takes place behind closed doors.

In 2013 it included ongoing engagement with, and the provision of expert advice to, national authorities; giving training on legal issues surrounding displacement; reviewing draft laws and policies; submitting recommendations via human rights mechanisms; and providing an expert voice at numerous roundtables and other events. As a result of our sustained efforts at the country level, often over many years, we saw positive steps in Afghanistan, Somalia and the Philippines, which all adopted policies, or initiated processes towards such policies, on internal displacement during the year.

At the global policy level, IDMC has taken part in wider debates to ensure that areas such as humanitarian reform and the international cluster system, the ratification and implementation of the Kampala Convention, climate change and disaster risk reduction are viewed through a displacement lens. In 2013, for example, our evidence and advocacy positioned displacement issues in the chair’s summary of the Fourth Session of the Global Platform on Disaster Risk Reduction, and for consideration in the development of a post-2015 global policy framework on disasters, or Hyogo Framework for Action 2, a process that we continue to be involved in.

We also engaged on a global level on housing, land and property issues, including via the integration of a displacement perspective into work on tenure security led by the special rapporteur on adequate housing.

That IDMC is able to carry out its work, research and analysis at so many different levels is down to the incredibly generous support of our funding partners. Your commitment, and the fact that you share our vision of ending the suffering of people living in, or at risk of displacement, has helped to ensure that we are able to strive ever further in our efforts to ensure that the voices of the world’s 33.3 million internally placed people are raised to the people who need to hear them. Thank you.