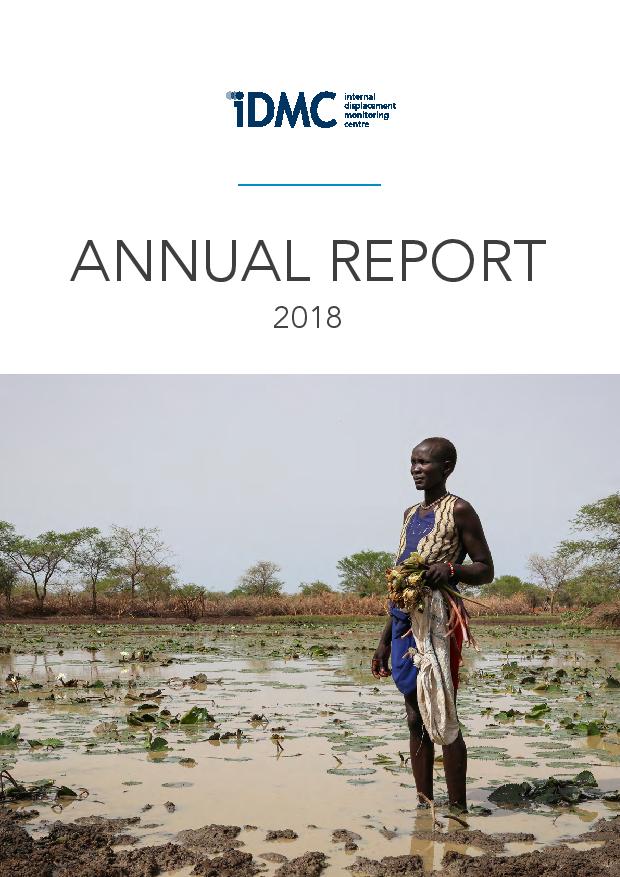 Last year was a significant year for IDMC. We celebrated our 20th birthday and 20 years since the adoption of the UN’s Guiding Principles on Internal Displacement.

The double anniversary provided an opportunity to reflect on the global situation. Protracted and cyclical conflict in places such as Syria and the Democratic Republic of the Congo; a rise in intercommunal violence in Ethiopia; hampered returns in Iraq and elsewhere; climate change making disasters more frequent and severe; and the rising risks associated with increased urbanisation all contributed to driving huge levels of displacement in 2018.

We estimate that 41.3 million people were living in internal displacement as a result of conflict and violence as of the end of 2018, nearly two-thirds more than the global number of refugees and the highest figure ever recorded. It is still a significant underestimate though, because the figure does not include people displaced by disasters. As in previous years, disasters were responsible for the majority of new displacements recorded between January and December. Tropical storms uprooted millions of people in highly exposed countries such as China, India and the Philippines.

The anniversary year was also an opportunity to take stock of progress. There have been some advances in terms of policy over the last 20 years, especially in Africa. The Great Lakes pact and the Kampala Convention, endorsed in 2006 and 2009 respectively, provided legal frameworks for regional security, including for internally displaced people. Elsewhere, disaster risk reduction was officially recognised as an issue requiring state-led but also global action with the adoption of the Sendai Framework in 2015. Several countries, such as the Philippines, have led the way in explicitly including displacement in their DRR planning. The Nansen Initiative, another state-led process, resulted in the endorsement by 109 governments of the Protection Agenda for people displaced across borders by disasters and climate change.

Today, internal displacement is recognised as an issue of global concern. There is also more global reporting on the scale of the phenomenon and the needs of those affected. Not enough has been done, however, to reduce their number. Collective international action has been lacking, and internal displacement was all but excluded from the two UN global compacts on refugees and migration approved at the end of 2018. More involvement and engagement with national governments of affected countries in debates and decision-making processes is also urgently needed.

Based on this understanding, we stepped up our policy and political engagement in 2018 with a range of governments, UN agencies, civil society organisations and multilateral policy processes. IDMC held its first interdisciplinary conference, bringing together policy makers, humanitarian and development practitioners and researchers to explore ways of integrating internal displacement into national development and economic planning.

Increasing the scope of our global monitoring and reporting, we introduced new tools, including a state-of-the-art monitoring platform. IDMC now accesses a multitude of different sources that allow us to report more accurately on the global scale, severity and diversity of internal displacement. We also met the request voiced by many of our donors by convening a series of displacement data workshops to identify ongoing data gaps and build a roadmap for improved coverage.

In partnership with leading academic institutions and organisations, we expanded our research agenda into two new areas, urban displacement and that associated with slow-onset disasters and climate change. The 9th World Urban Forum held in Kuala Lumpur offered IDMC the ideal opportunity to launch our urban displacement research programme in the company of government ministers, city majors and municipal authorities. Our work was also featured and widely recognised at key global gatherings such as the Paris Peace Forum.

We are proud of how far we have come since our establishment two decades ago, and we take this opportunity to thank all our partners for their generous and loyal support over the years. We look forward to extending our collaboration into 2019 and beyond.