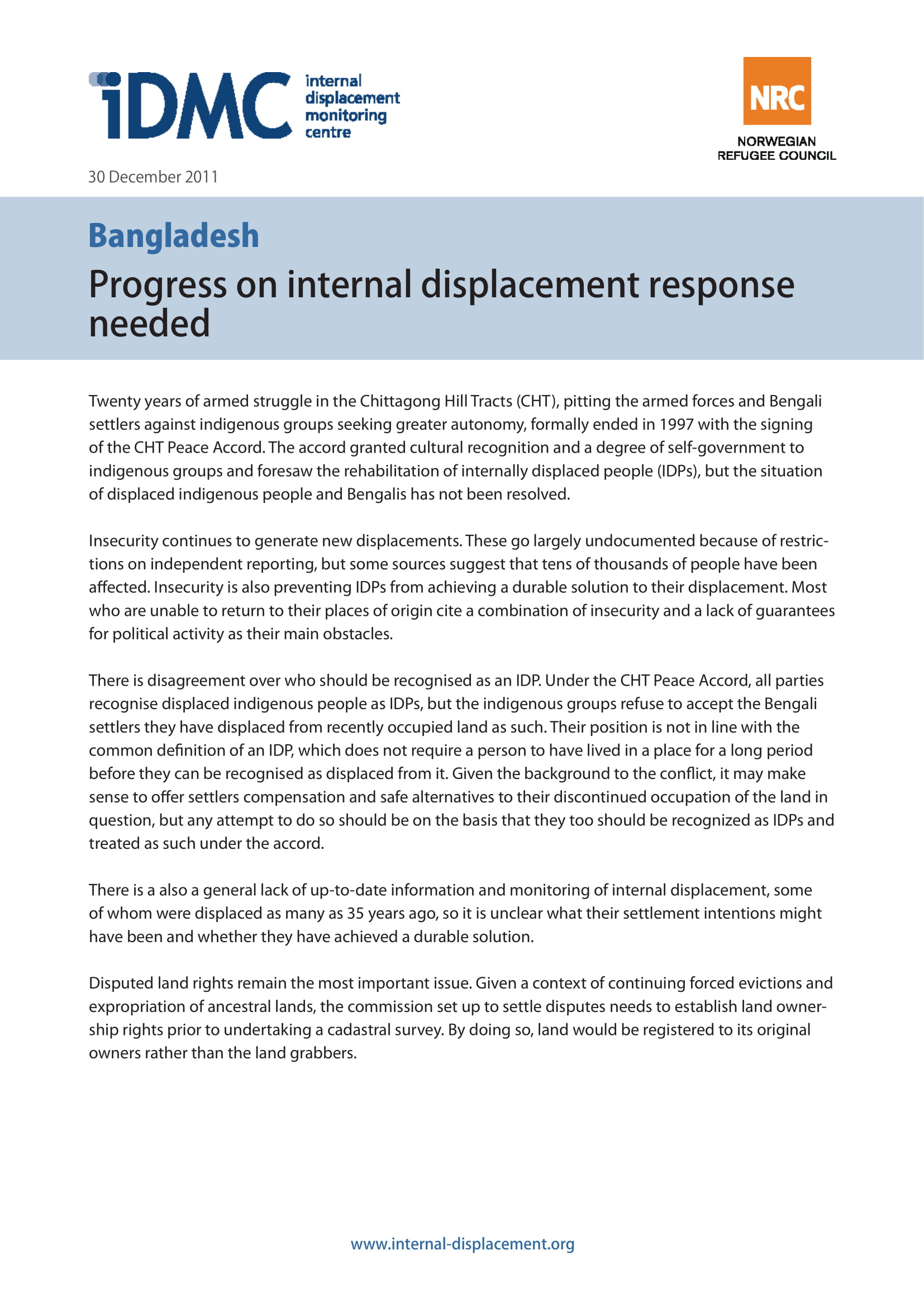 Twenty years of armed struggle in the Chittagong Hill Tracts (CHT), pitting the armed forces and Bengali settlers against indigenous groups seeking greater autonomy, formally ended in 1997 with the signing of the CHT Peace Accord. The accord granted cultural recognition and a degree of self-government to indigenous groups and foresaw the rehabilitation of internally displaced people (IDPs), but the situation of displaced indigenous people and Bengalis has not been resolved.

Insecurity continues to generate new displacements. These go largely undocumented because of restrictions on independent reporting, but some sources suggest that tens of thousands of people have been affected. Insecurity is also preventing IDPs from achieving a durable solution to their displacement. Most who are unable to return to their places of origin cite a combination of insecurity and a lack of guarantees for political activity as their main obstacles.

There is disagreement over who should be recognised as an IDP. Under the CHT Peace Accord, all parties recognise displaced indigenous people as IDPs, but the indigenous groups refuse to accept the Bengali settlers they have displaced from recently occupied land as such. Their position is not in line with the common definition of an IDP, which does not require a person to have lived in a place for a long period before they can be recognised as displaced from it. Given the background to the conflict, it may make sense to offer settlers compensation and safe alternatives to their discontinued occupation of the land in question, but any attempt to do so should be on the basis that they too should be recognized as IDPs and treated as such under the accord.

There is a also a general lack of up-to-date information and monitoring of internal displacement, some of whom were displaced as many as 35 years ago, so it is unclear what their settlement intentions might have been and whether they have achieved a durable solution.

Disputed land rights remain the most important issue. Given a context of continuing forced evictions and expropriation of ancestral lands, the commission set up to settle disputes needs to establish land ownership rights prior to undertaking a cadastral survey. By doing so, land would be registered to its original owners rather than the land grabbers.