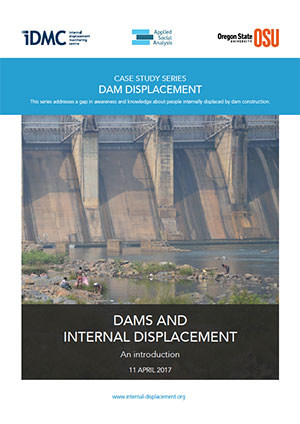 An estimated 80 million people have been displaced by dam projects worldwide. Their fate is largely unknown, but evidence shows that those affected tend to become impoverished and marginalised and these impacts are long-lasting. At the same time, the rate of dam construction shows no sign of abating. Whether the benefits of new dams will outweigh their costs remains to be seen, but the risk of displacement and related impoverishment and marginalisation remains.

With this case study series, IDMC aims to gradually draw a global picture of displacement associated with dam projects. We aim to cover the drivers and process of displacement, the numbers of people displaced, their onward movements, the impacts they face, progress towards solutions for them and how this displacement affects broader society.

Dams can contribute to the achievement of economic and social development. The long planning phase of dam construction is an opportunity to ensure that potential displacement is adequately assessed, alternatives are sought, the rights of the displaced are respected, and that development investments contribute to overall progress instead of creating new vulnerabilities and undermining social resilience.

The introduction to the case study series is available here.

Turkey - Lessons not learned from the Ilisu Dam

Turkey’s Ilisu Dam is Europe’s largest dam project under construction. As of early 2017 the land acquisition and expropriation process was nearly complete, the dam was around 80 per cent built and 190 families had been resettled. Most displacement of up to 78,000 people had yet to take place.

The Turkish government constructed a new settlement for some of those to be displaced by the flooding. However, land has been expropriated without those affected being consulted or given enough information, and before resettlement sites have been identified. Compensation has been insufficient to replace lost housing and land, and a planned livelihood restoration programme and complaints mechanism have not materialised.

International financing was withdrawn as a result of non-compliance with international standards. Turkey is financing the dam itself and is still in a position to reverse the adverse consequences of displacement and resettlement caused by the dam and avoid future adverse impacts. Lessons learned could also be shared with other countries embarking on similar projects.

The case study is available here.

China is home to nearly half of the world’s 50,000 large dams. The country’s population growth, rising living standards and focus on exports increased annual energy consumption by fivefold between 1980 and 2010. Hydropower projects are prioritised in China in order to meet these high electricity demands.

In 1996, the construction of the Manwan Dam on the Upper Mekong River displaced 7,260 people, twice the official estimate. The displacement and resettlement process was plagued by insufficient government oversight, limited financial and technical resources and a lack of community consultation and social impact assessment to plan for resettlement.

The case study is available here.

Disaster Displacement in Asia and the Pacific

Publication
Human Development in the Anthropocene: Transformations to Expand Human Freedoms in Balance with the Planet

Publication
Chatham House: Internal Displacement in Asia and the Pacific