Chad: Improvements in security allow for the return of some IDPs 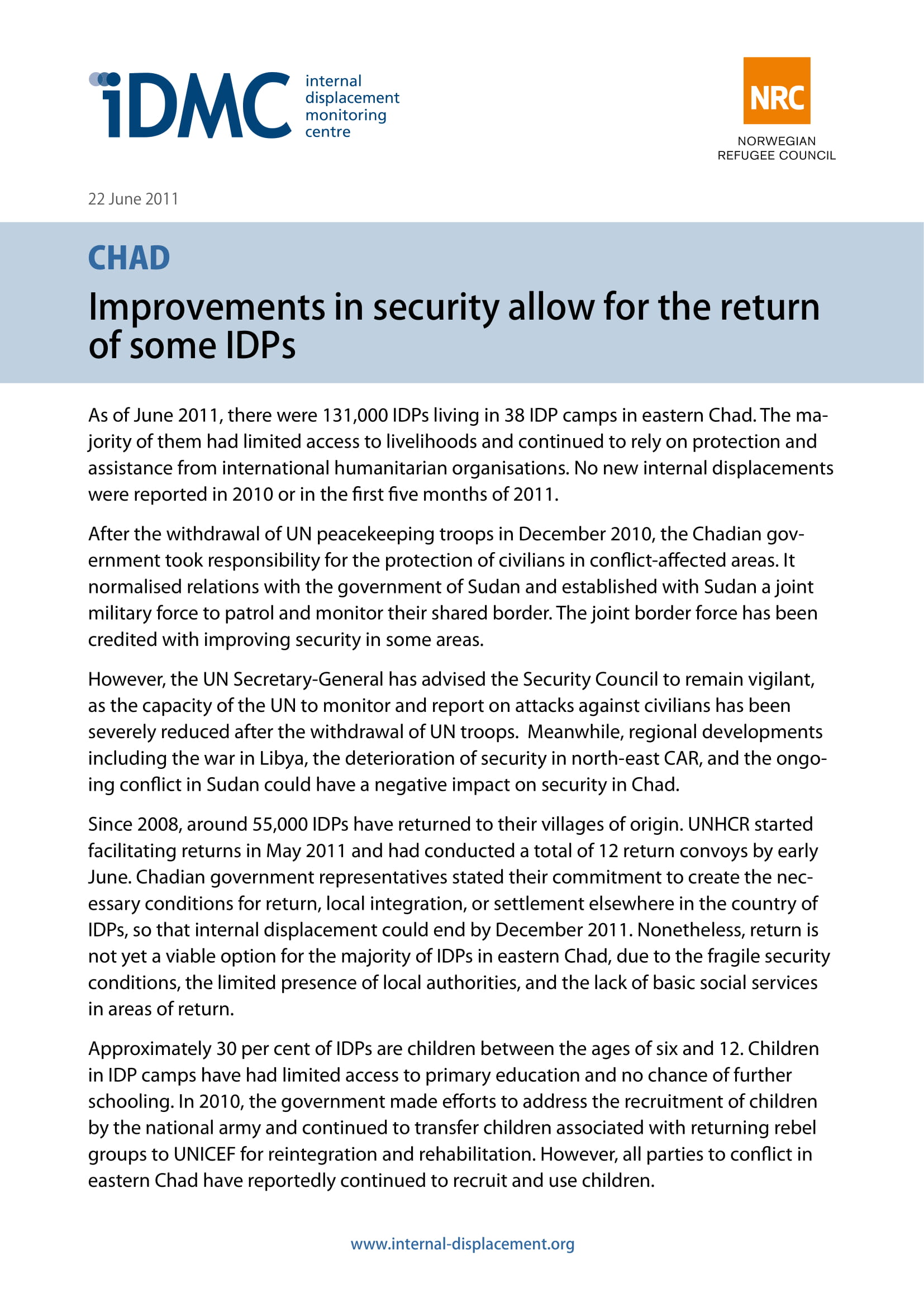 As of June 2011, there were 131,000 IDPs living in 38 IDP camps in eastern Chad. The majority of them had limited access to livelihoods and continued to rely on protection and assistance from international humanitarian organisations. No new internal displacements were reported in 2010 or in the first five months of 2011.

After the withdrawal of UN peacekeeping troops in December 2010, the Chadian government took responsibility for the protection of civilians in conflict-affected areas. It normalised relations with the government of Sudan and established with Sudan a joint military force to patrol and monitor their shared border. The joint border force has been credited with improving security in some areas.

However, the UN Secretary-General has advised the Security Council to remain vigilant, as the capacity of the UN to monitor and report on attacks against civilians has been severely reduced after the withdrawal of UN troops.  Meanwhile, regional developments including the war in Libya, the deterioration of security in north-east CAR, and the ongoing conflict in Sudan could have a negative impact on security in Chad.

Since 2008, around 55,000 IDPs have returned to their villages of origin. UNHCR started facilitating returns in May 2011 and had conducted a total of 12 return convoys by early June. Chadian government representatives stated their commitment to create the necessary conditions for return, local integration, or settlement elsewhere in the country of IDPs, so that internal displacement could end by December 2011. Nonetheless, return is not yet a viable option for the majority of IDPs in eastern Chad, due to the fragile security conditions, the limited presence of local authorities, and the lack of basic social services in areas of return.

Approximately 30 per cent of IDPs are children between the ages of six and 12. Children in IDP camps have had limited access to primary education and no chance of further schooling. In 2010, the government made efforts to address the recruitment of children by the national army and continued to transfer children associated with returning rebel groups to UNICEF for reintegration and rehabilitation. However, all parties to conflict in eastern Chad have reportedly continued to recruit and use children.