Colombia: Improved government response yet to have impact for IDPs 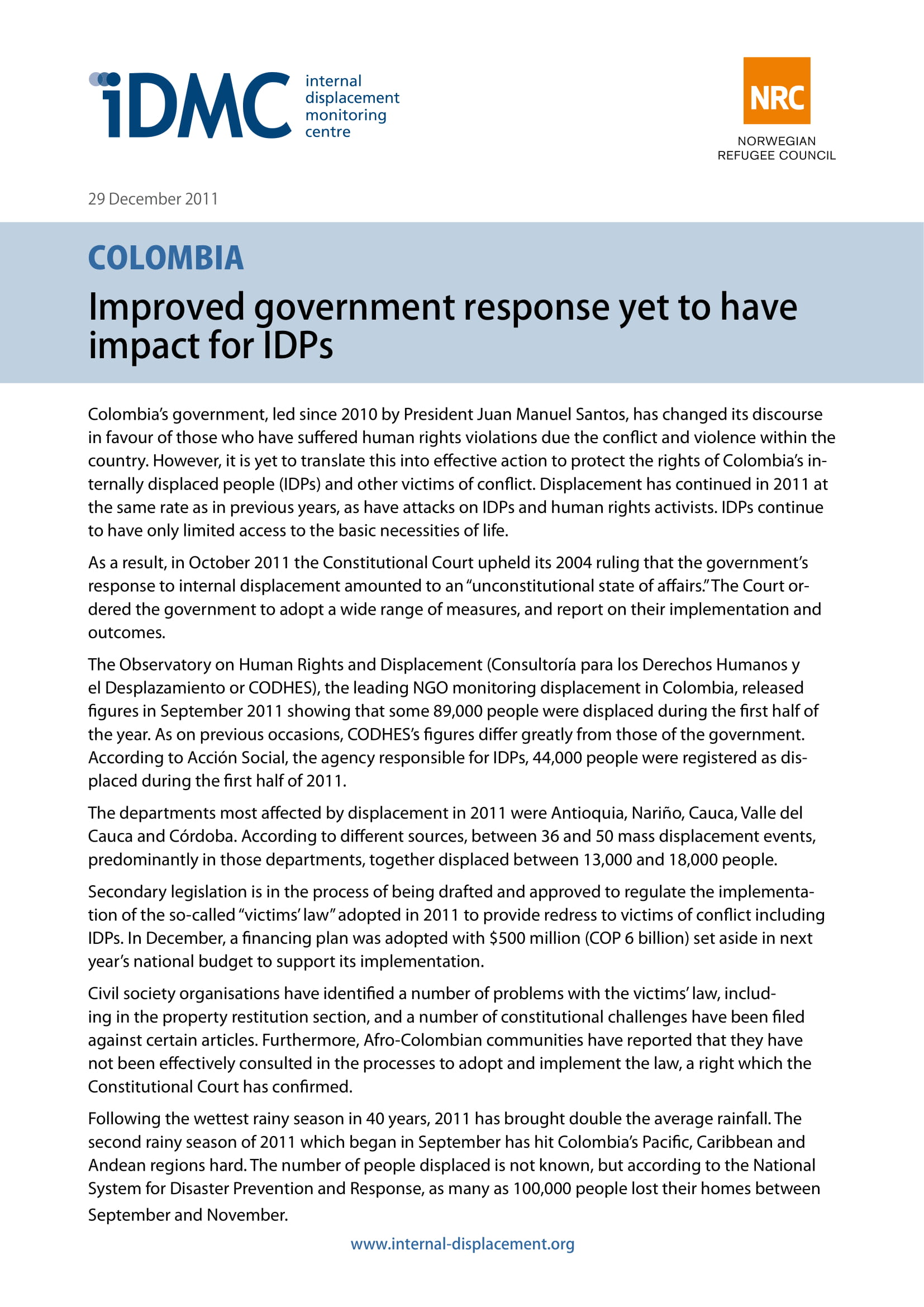 Colombia’s government, led since 2010 by President Juan Manuel Santos, has changed its discourse in favour of those who have suffered human rights violations due the conflict and violence within the country. However, it is yet to translate this into effective action to protect the rights of Colombia’s internally displaced people (IDPs) and other victims of conflict. Displacement has continued in 2011 at the same rate as in previous years, as have attacks on IDPs and human rights activists. IDPs continue to have only limited access to the basic necessities of life.

As a result, in October 2011 the Constitutional Court upheld its 2004 ruling that the government’s response to internal displacement amounted to an “unconstitutional state of affairs.” The Court ordered the government to adopt a wide range of measures, and report on their implementation and outcomes.

The Observatory on Human Rights and Displacement (Consultoría para los Derechos Humanos y el Desplazamiento or CODHES), the leading NGO monitoring displacement in Colombia, released figures in September 2011 showing that some 89,000 people were displaced during the first half of the year. As on previous occasions, CODHES’s figures differ greatly from those of the government. According to Acción Social, the agency responsible for IDPs, 44,000 people were registered as displaced during the first half of 2011.

The departments most affected by displacement in 2011 were Antioquia, Nariño, Cauca, Valle del Cauca and Córdoba. According to different sources, between 36 and 50 mass displacement events, predominantly in those departments, together displaced between 13,000 and 18,000 people.

Secondary legislation is in the process of being drafted and approved to regulate the implementation of the so-called “victims’ law” adopted in 2011 to provide redress to victims of conflict including IDPs. In December, a financing plan was adopted with $500 million (COP 6 billion) set aside in next year’s national budget to support its implementation.

Civil society organisations have identified a number of problems with the victims’ law, including in the property restitution section, and a number of constitutional challenges have been filed against certain articles. Furthermore, Afro-Colombian communities have reported that they have not been effectively consulted in the processes to adopt and implement the law, a right which the Constitutional Court has confirmed.

Following the wettest rainy season in 40 years, 2011 has brought double the average rainfall. The second rainy season of 2011 which began in September has hit Colombia’s Pacific, Caribbean and Andean regions hard. The number of people displaced is not known, but according to the National System for Disaster Prevention and Response, as many as 100,000 people lost their homes between September and November.