Haiti: A humanitarian crisis in need of a development solution 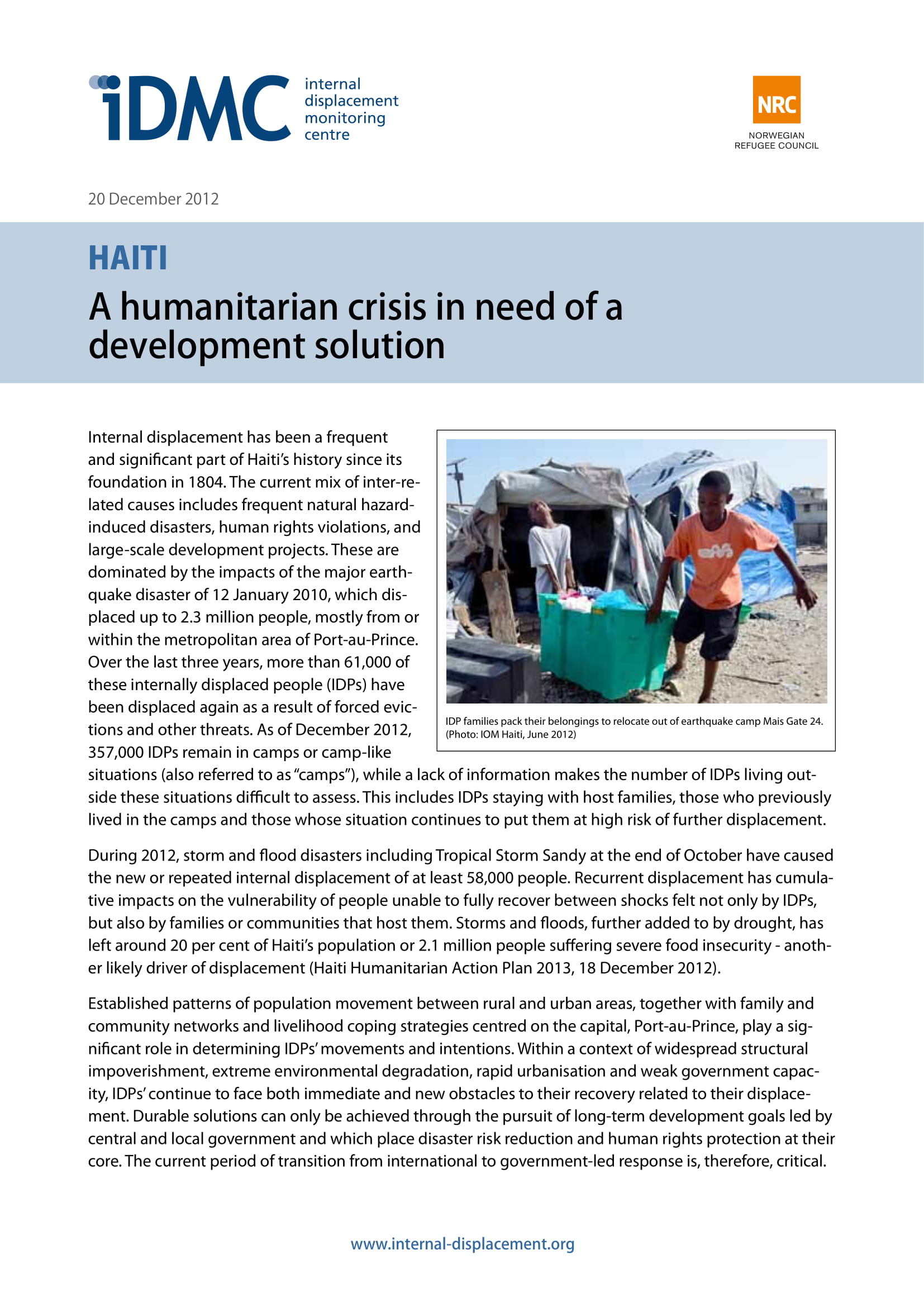 Internal displacement has been a frequent and significant part of Haiti’s history since its foundation in 1804. The current mix of inter-related causes includes frequent natural hazardinduced disasters, human rights violations, and large-scale development projects. These are dominated by the impacts of the major earthquake disaster of 12 January 2010, which displaced up to 2.3 million people, mostly from or within the metropolitan area of Port-au-Prince. Over the last three years, more than 61,000 of these internally displaced people (IDPs) have been displaced again as a result of forced evictions and other threats. As of December 2012, 357,000 IDPs remain in camps or camp-like situations (also referred to as “camps”), while a lack of information makes the number of IDPs living outside these situations difficult to assess. This includes IDPs staying with host families, those who previously lived in the camps and those whose situation continues to put them at high risk of further displacement.

During 2012, storm and flood disasters including Tropical Storm Sandy at the end of October have caused the new or repeated internal displacement of at least 58,000 people. Recurrent displacement has cumulative impacts on the vulnerability of people unable to fully recover between shocks felt not only by IDPs, but also by families or communities that host them. Storms and floods, further added to by drought, has left around 20 per cent of Haiti’s population or 2.1 million people suffering severe food insecurity - another likely driver of displacement (Haiti Humanitarian Action Plan 2013, 18 December 2012).

Established patterns of population movement between rural and urban areas, together with family and community networks and livelihood coping strategies centred on the capital, Port-au-Prince, play a significant role in determining IDPs’ movements and intentions. Within a context of widespread structural impoverishment, extreme environmental degradation, rapid urbanisation and weak government capacity, IDPs’ continue to face both immediate and new obstacles to their recovery related to their displacement. Durable solutions can only be achieved through the pursuit of long-term development goals led by central and local government and which place disaster risk reduction and human rights protection at their core. The current period of transition from international to government-led response is, therefore, critical.