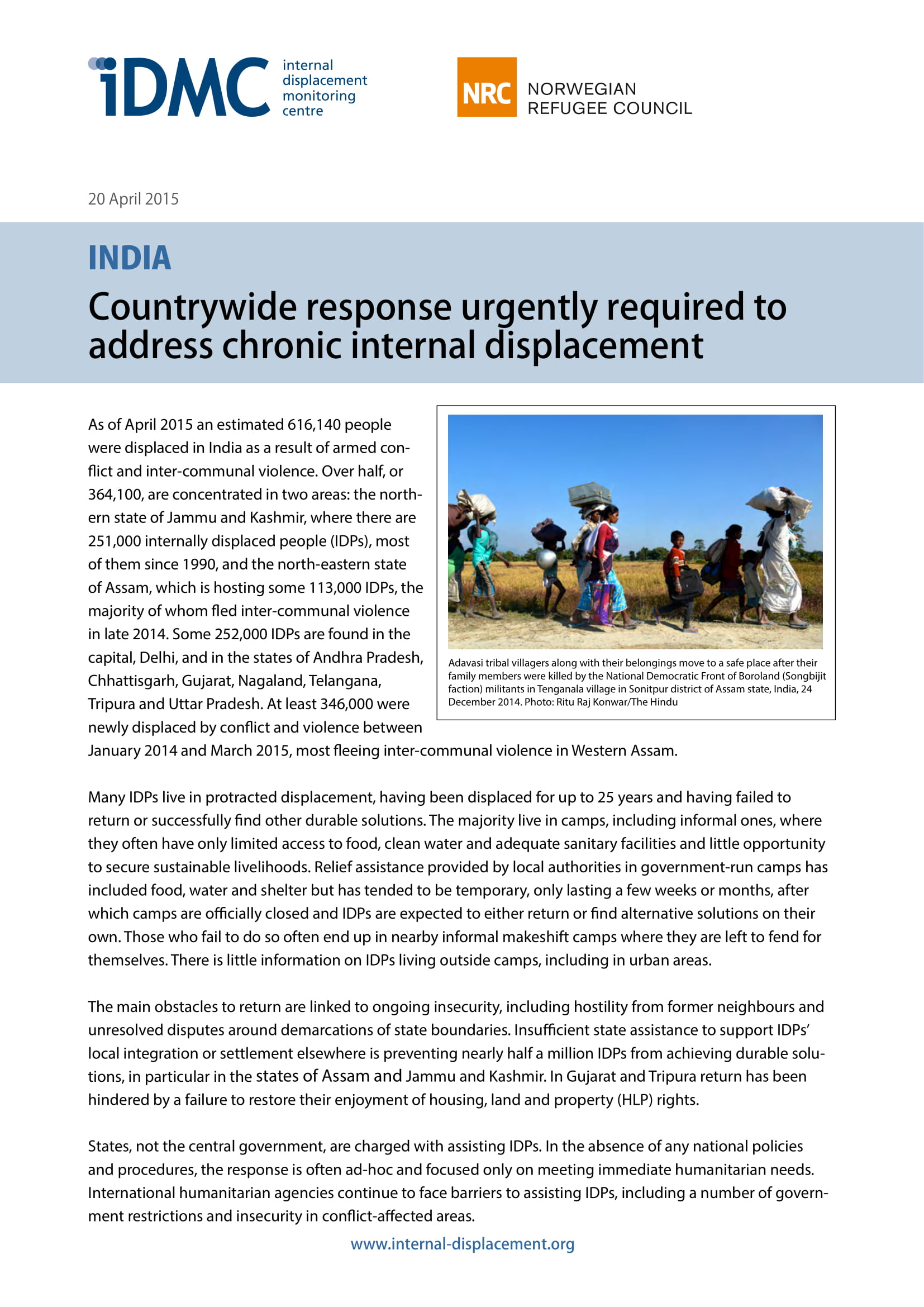 As of April 2015 an estimated 616,140 people were displaced in India as a result of armed conflict and inter-communal violence. Over half, or 364,100, are concentrated in two areas: the northern state of Jammu and Kashmir, where there are 251,000 internally displaced people (IDPs), most of them since 1990, and the north-eastern state of Assam, which is hosting some 113,000 IDPs, the majority of whom fled inter-communal violence in late 2014. Some 252,000 IDPs are found in the capital, Delhi, and in the states of Andhra Pradesh, Chhattisgarh, Gujarat, Nagaland, Telangana, Tripura and Uttar Pradesh. At least 346,000 were newly displaced by conflict and violence between January 2014 and March 2015, most fleeing inter-communal violence in Western Assam.

Many IDPs live in protracted displacement, having been displaced for up to 25 years and having failed to return or successfully find other durable solutions. The majority live in camps, including informal ones, where they often have only limited access to food, clean water and adequate sanitary facilities and little opportunity to secure sustainable livelihoods. Relief assistance provided by local authorities in government-run camps has included food, water and shelter but has tended to be temporary, only lasting a few weeks or months, after which camps are officially closed and IDPs are expected to either return or find alternative solutions on their own. Those who fail to do so often end up in nearby informal makeshift camps where they are left to fend for themselves. There is little information on IDPs living outside camps, including in urban areas.

The main obstacles to return are linked to ongoing insecurity, including hostility from former neighbours and unresolved disputes around demarcations of state boundaries. Insufficient state assistance to support IDPs’ local integration or settlement elsewhere is preventing nearly half a million IDPs from achieving durable solutions, in particular in the states of Assam and Jammu and Kashmir. In Gujarat and Tripura return has been hindered by a failure to restore their enjoyment of housing, land and property (HLP) rights.

States, not the central government, are charged with assisting IDPs. In the absence of any national policies and procedures, the response is often ad-hoc and focused only on meeting immediate humanitarian needs. International humanitarian agencies continue to face barriers to assisting IDPs, including a number of government restrictions and insecurity in conflict-affected areas.

The designation of an IDP focal point at the national level and the adoption of a policy and regulatory framework upholding the rights of IDPs would help ensure a more comprehensive countrywide response.