Indonesia: Durable solutions remain elusive for many IDPs while thousands are newly displaced by military operations in Papua 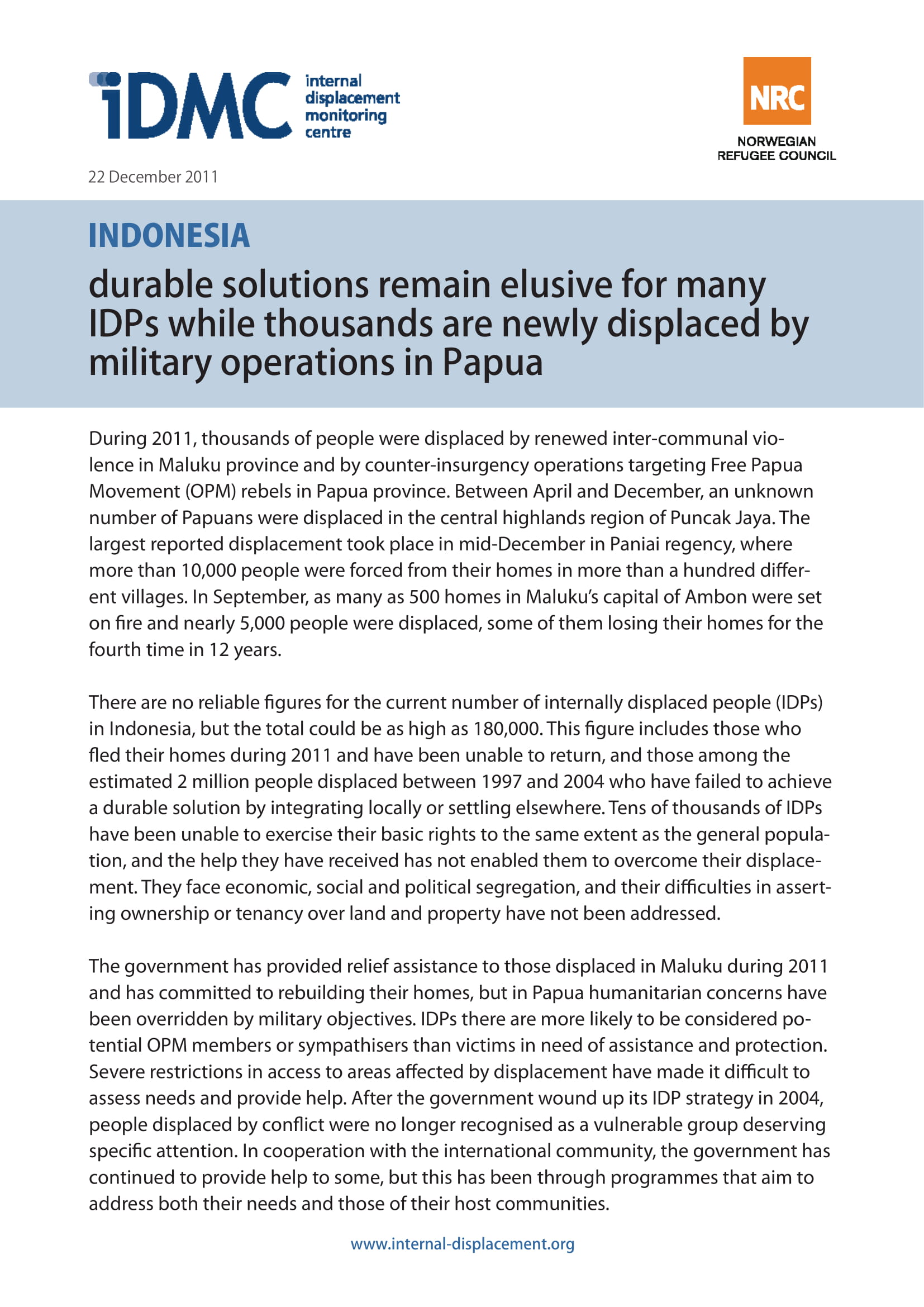 During 2011, thousands of people were displaced by renewed inter-communal violence in Maluku province and by counter-insurgency operations targeting Free Papua Movement (OPM) rebels in Papua province. Between April and December, an unknown number of Papuans were displaced in the central highlands region of Puncak Jaya. The largest reported displacement took place in mid-December in Paniai regency, where more than 10,000 people were forced from their homes in more than a hundred different villages. In September, as many as 500 homes in Maluku’s capital of Ambon were set on fire and nearly 5,000 people were displaced, some of them losing their homes for the fourth time in 12 years.

There are no reliable figures for the current number of internally displaced people (IDPs) in Indonesia, but the total could be as high as 180,000. This figure includes those who fled their homes during 2011 and have been unable to return, and those among the estimated 2 million people displaced between 1997 and 2004 who have failed to achieve a durable solution by integrating locally or settling elsewhere. Tens of thousands of IDPs have been unable to exercise their basic rights to the same extent as the general population, and the help they have received has not enabled them to overcome their displacement. They face economic, social and political segregation, and their difficulties in asserting ownership or tenancy over land and property have not been addressed.

The government has provided relief assistance to those displaced in Maluku during 2011 and has committed to rebuilding their homes, but in Papua humanitarian concerns have been overridden by military objectives. IDPs there are more likely to be considered potential OPM members or sympathisers than victims in need of assistance and protection. Severe restrictions in access to areas affected by displacement have made it difficult to assess needs and provide help. After the government wound up its IDP strategy in 2004, people displaced by conflict were no longer recognised as a vulnerable group deserving specific attention. In cooperation with the international community, the government has continued to provide help to some, but this has been through programmes that aim to address both their needs and those of their host communities.