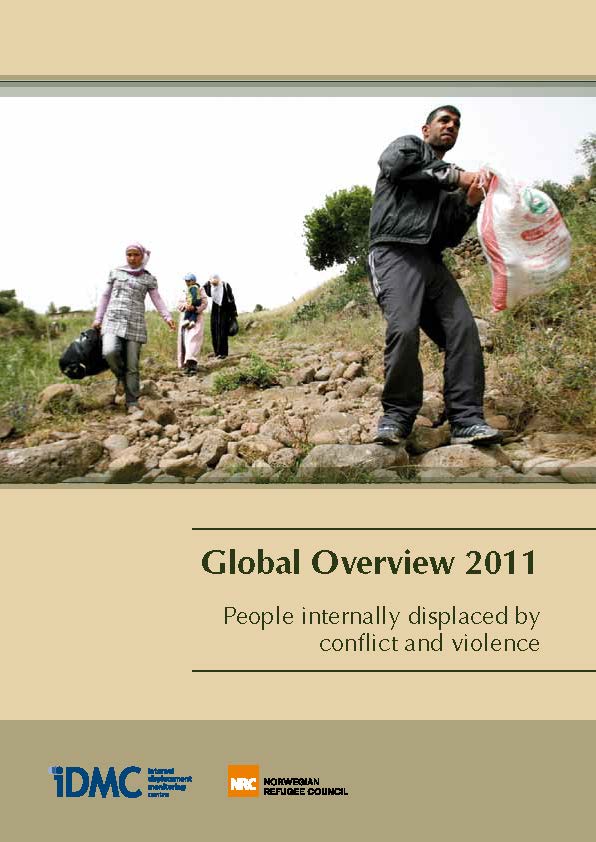 For the last 14 years, the Norwegian Refugee Council’s Internal Displacement Monitoring Centre has monitored internal displacement resulting from conflict and violence across the world. In 2011, the number of people internally displaced by these causes stood at 26.4 million.

The world in 2011 was an unsafe place for millions of people. From criminal violence including attacks by armed groups in sub-Saharan Africa or by drug cartels in Latin America, to armed clashes such as those associated with the conflict in Côte d’Ivoire or the uprisings across the Arab world: such events caused hundreds of thousands of people to flee their homes. Many risked their lives as they sought refuge in unfamiliar environments while facing a constant struggle to meet their basic needs.

The circumstances of people’s displacement and their long- term prospects were as diverse as the situations of violence or conflict which had forced them to flee. For example, while the Arab Spring uprisings resulted in short-term spikes of dis- placement throughout the year, in Iraq well over two million people remained locked in situations of protracted internal displacement. In Afghanistan, displacement was becoming increasingly protracted by 2011. As 60 per cent of the internally displaced population in Afghanistan are children, the prospects for this next generation are particularly bleak.

Despite these challenges, there have also been some positive developments in 2011. Although Africa was still the region with the largest number of IDPs in 2011, the total number there continued to follow a downward trend which had begun in 2004.

African countries remain at the forefront of the develop- ment of international legal standards for addressing internal displacement. Three years ago, the African Union adopted the Convention for the Protection and Assistance of Internally Displaced Persons in Africa. When it comes into force, the Kampala Convention will be the first legally-binding regional instrument on internal displacement. The Convention needs to be ratified by 15 countries to come into force. In 2011, eight countries had ratified the Convention, and a further six had completed their internal preparations for ratification, making this a real prospect for 2012.

It is only through effective government action that responses can be developed which improve the long-term prospects of internally displaced people, and allow them to make their own decisions concerning their future. While Africa shows that op- portunities for change lie on the horizon, governments still all too often lack the resources, the capacity or the will to enable such change. It is the role of the international community to offer consistent support to governments, to ensure they meet their responsibilities towards the internally displaced people on their territory.