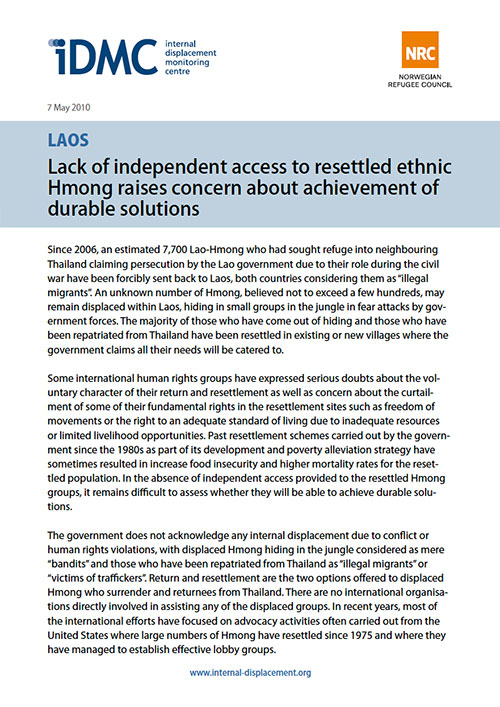 Since 2006, an estimated 7,700 Lao-Hmong who had sought refuge into neighbouring Thailand claiming persecution by the Lao government due to their role during the civil war have been forcibly sent back to Laos, both countries considering them as “illegal migrants”. An unknown number of Hmong, believed not to exceed a few hundreds, may remain displaced within Laos, hiding in small groups in the jungle in fear attacks by government forces. The majority of those who have come out of hiding and those who have been repatriated from Thailand have been resettled in existing or new villages where the government claims all their needs will be catered to.

Some international human rights groups have expressed serious doubts about the voluntary character of their return and resettlement as well as concern about the curtailment of some of their fundamental rights in the resettlement sites such as freedom of movements or the right to an adequate standard of living due to inadequate resources or limited livelihood opportunities. Past resettlement schemes carried out by the government since the 1980s as part of its development and poverty alleviation strategy have sometimes resulted in increase food insecurity and higher mortality rates for the resettled population. In the absence of independent access provided to the resettled Hmong groups, it remains difficult to assess whether they will be able to achieve durable solutions.

The government does not acknowledge any internal displacement due to conflict or human rights violations, with displaced Hmong hiding in the jungle considered as mere “bandits” and those who have been repatriated from Thailand as “illegal migrants” or “victims of traffickers”. Return and resettlement are the two options offered to displaced Hmong who surrender and returnees from Thailand. There are no international organisations directly involved in assisting any of the displaced groups. In recent years, most of the international efforts have focused on advocacy activities often carried out from the United States where large numbers of Hmong have resettled since 1975 and where they have managed to establish effective lobby groups.