Lebanon: No new displacement but causes of past conﬂicts unresolved 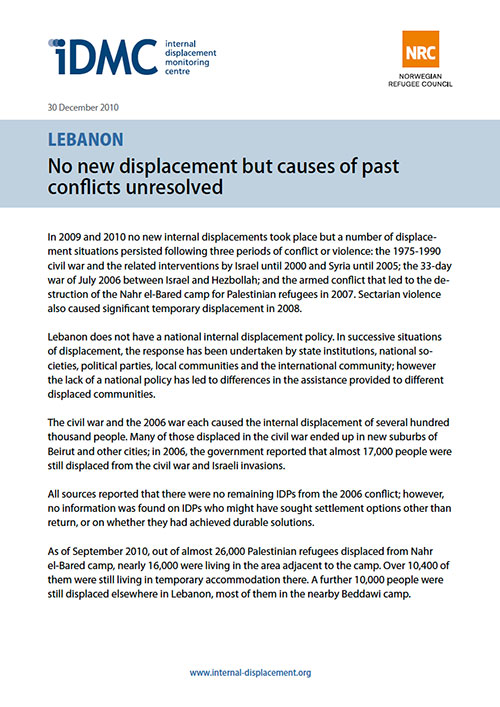 In 2009 and 2010 no new internal displacements took place but a number of displacement situations persisted following three periods of conflict or violence: the 1975-1990 civil war and the related interventions by Israel until 2000 and Syria until 2005; the 33-day war of July 2006 between Israel and Hezbollah; and the armed conflict that led to the destruction of the Nahr el-Bared camp for Palestinian refugees in 2007. Sectarian violence also caused significant temporary displacement in 2008.

Lebanon does not have a national internal displacement policy. In successive situations of displacement, the response has been undertaken by state institutions, national societies, political parties, local communities and the international community; however the lack of a national policy has led to differences in the assistance provided to different displaced communities.

The civil war and the 2006 war each caused the internal displacement of several hundred thousand people. Many of those displaced in the civil war ended up in new suburbs of Beirut and other cities; in 2006, the government reported that almost 17,000 people were still displaced from the civil war and Israeli invasions.

All sources reported that there were no remaining IDPs from the 2006 conflict; however, no information was found on IDPs who might have sought settlement options other than return, or on whether they had achieved durable solutions.

As of September 2010, out of almost 26,000 Palestinian refugees displaced from Nahr el-Bared camp, nearly 16,000 were living in the area adjacent to the camp. Over 10,400 of them were still living in temporary accommodation there. A further 10,000 people were still displaced elsewhere in Lebanon, most of them in the nearby Beddawi camp.