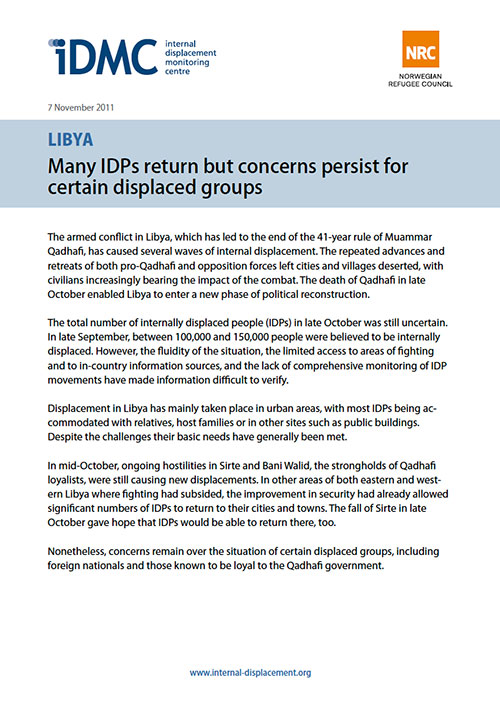 The armed conflict in Libya, which has led to the end of the 41-year rule of Muammar Qadhafi, has caused several waves of internal displacement. The repeated advances and retreats of both pro-Qadhafi and opposition forces left cities and villages deserted, with civilians increasingly bearing the impact of the combat. The death of Qadhafi in late October enabled Libya to enter a new phase of political reconstruction.

The total number of internally displaced people (IDPs) in late October was still uncertain. In late September, between 100,000 and 150,000 people were believed to be internally displaced. However, the fluidity of the situation, the limited access to areas of fighting and to in-country information sources, and the lack of comprehensive monitoring of IDP movements have made information difficult to verify.

Displacement in Libya has mainly taken place in urban areas, with most IDPs being accommodated with relatives, host families or in other sites such as public buildings. Despite the challenges their basic needs have generally been met.

In mid-October, ongoing hostilities in Sirte and Bani Walid, the strongholds of Qadhafi loyalists, were still causing new displacements. In other areas of both eastern and western Libya where fighting had subsided, the improvement in security had already allowed significant numbers of IDPs to return to their cities and towns. The fall of Sirte in late October gave hope that IDPs would be able to return there, too.

Nonetheless, concerns remain over the situation of certain displaced groups, including foreign nationals and those known to be loyal to the Qadhafi government.