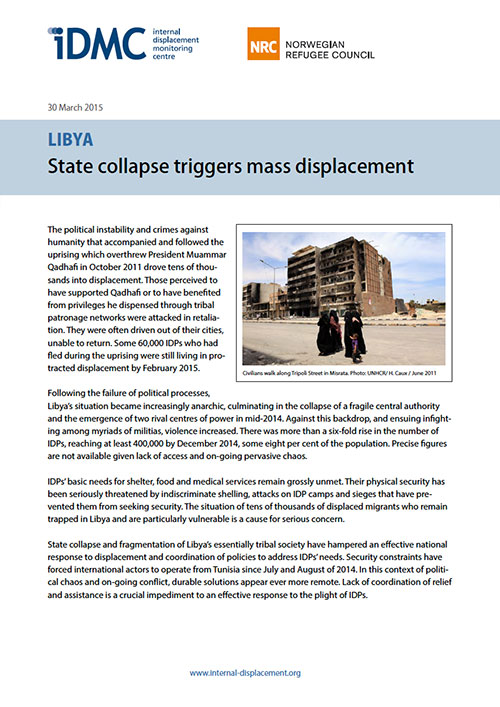 The political instability and crimes against humanity that accompanied and followed the uprising which overthrew President Muammar Qadhafi in October 2011 drove tens of thou-sands into displacement. Those perceived to have supported Qadhafi or to have benefited from privileges he dispensed through tribal patronage networks were attacked in retaliation. They were often driven out of their cities, unable to return. Some 60,000 IDPs who had fled during the uprising were still living in protracted displacement by February 2015.

Following the failure of political processes, Libya’s situation became increasingly anarchic, culminating in the collapse of a fragile central authority and the emergence of two rival centres of power in mid-2014. Against this backdrop, and ensuing infighting among myriads of militias, violence increased. There was more than a six-fold rise in the number of IDPs, reaching at least 400,000 by December 2014, some eight per cent of the population. Precise figures are not available given lack of access and on-going pervasive chaos.

IDPs’ basic needs for shelter, food and medical services remain grossly unmet. Their physical security has been seriously threatened by indiscriminate shelling, attacks on IDP camps and sieges that have prevented them from seeking security. The situation of tens of thousands of displaced migrants who remain trapped in Libya and are particularly vulnerable is a cause for serious concern.

State collapse and fragmentation of Libya’s essentially tribal society have hampered an effective national response to displacement and coordination of policies to address IDPs’ needs. Security constraints have forced international actors to operate from Tunisia since July and August of 2014. In this context of political chaos and on-going conflict, durable solutions appear ever more remote. Lack of coordination of relief and assistance is a crucial impediment to an effective response to the plight of IDPs.