Mexico: Displacement due to criminal and communal violence 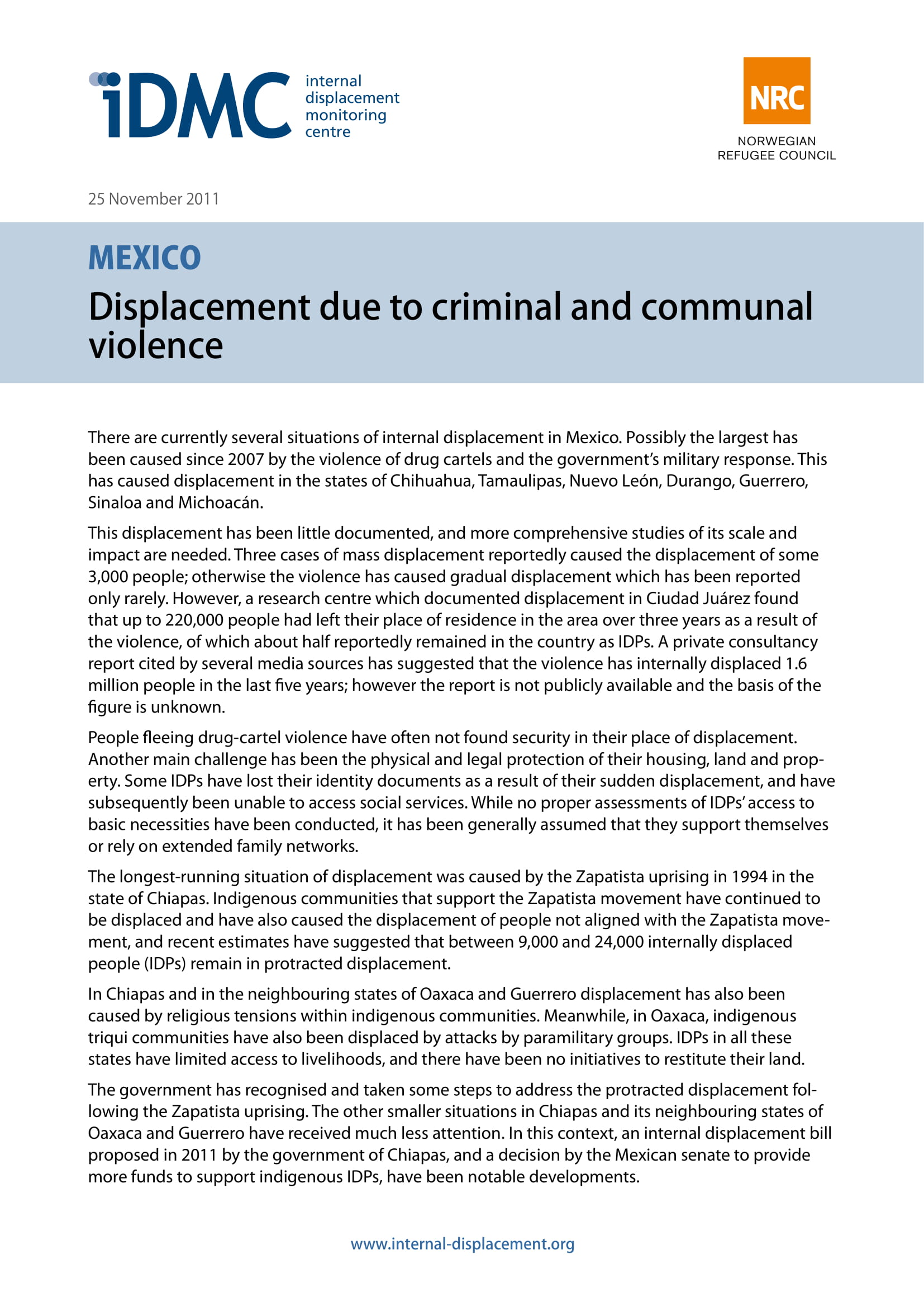 There are currently several situations of internal displacement in Mexico. Possibly the largest has been caused since 2007 by the violence of drug cartels and the government’s military response. This has caused displacement in the states of Chihuahua, Tamaulipas, Nuevo León, Durango, Guerrero, Sinaloa and Michoacán.

This displacement has been little documented, and more comprehensive studies of its scale and impact are needed. Three cases of mass displacement reportedly caused the displacement of some 3,000 people; otherwise the violence has caused gradual displacement which has been reported only rarely. However, a research centre which documented displacement in Ciudad Juárez found that up to 220,000 people had left their place of residence in the area over three years as a result of the violence, of which about half reportedly remained in the country as IDPs. A private consultancy report cited by several media sources has suggested that the violence has internally displaced 1.6 million people in the last five years; however the report is not publicly available and the basis of the figure is unknown.

People fleeing drug-cartel violence have often not found security in their place of displacement. Another main challenge has been the physical and legal protection of their housing, land and property. Some IDPs have lost their identity documents as a result of their sudden displacement, and have subsequently been unable to access social services. While no proper assessments of IDPs’ access to basic necessities have been conducted, it has been generally assumed that they support themselves or rely on extended family networks.

In Chiapas and in the neighbouring states of Oaxaca and Guerrero displacement has also been caused by religious tensions within indigenous communities. Meanwhile, in Oaxaca, indigenous triqui communities have also been displaced by attacks by paramilitary groups. IDPs in all these states have limited access to livelihoods, and there have been no initiatives to restitute their land.

The government has recognised and taken some steps to address the protracted displacement following the Zapatista uprising. The other smaller situations in Chiapas and its neighbouring states of Oaxaca and Guerrero have received much less attention. In this context, an internal displacement bill proposed in 2011 by the government of Chiapas, and a decision by the Mexican senate to provide more funds to support indigenous IDPs, have been notable developments.