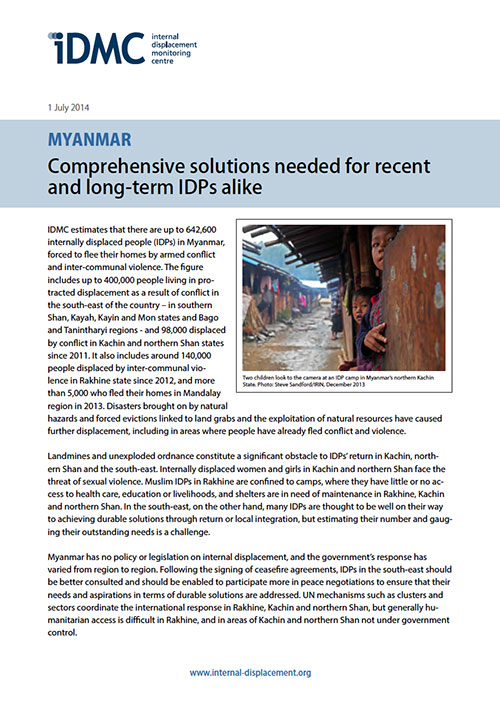 IDMC estimates that there are up to 642,600 internally displaced people (IDPs) in Myanmar, forced to flee their homes by armed conflict and inter-communal violence. The figure includes up to 400,000 people living in protracted displacement as a result of conflict in the south-east of the country – in southern Shan, Kayah, Kayin and Mon states and Bago and Tanintharyi regions - and 98,000 displaced by conflict in Kachin and northern Shan states since 2011. It also includes around 140,000 people displaced by inter-communal violence in Rakhine state since 2012, and more than 5,000 who fled their homes in Mandalay region in 2013. Disasters brought on by natural hazards and forced evictions linked to land grabs and the exploitation of natural resources have caused further displacement, including in areas where people have already fled conflict and violence.

Landmines and unexploded ordnance constitute a significant obstacle to IDPs’ return in Kachin, northern Shan and the south-east. Internally displaced women and girls in Kachin and northern Shan face the threat of sexual violence. Muslim IDPs in Rakhine are confined to camps, where they have little or no ac-cess to health care, education or livelihoods, and shelters are in need of maintenance in Rakhine, Kachin and northern Shan. In the south-east, on the other hand, many IDPs are thought to be well on their way to achieving durable solutions through return or local integration, but estimating their number and gauging their outstanding needs is a challenge.

Myanmar has no policy or legislation on internal displacement, and the government’s response has varied from region to region. Following the signing of ceasefire agreements, IDPs in the south-east should be better consulted and should be enabled to participate more in peace negotiations to ensure that their needs and aspirations in terms of durable solutions are addressed. UN mechanisms such as clusters and sectors coordinate the international response in Rakhine, Kachin and northern Shan, but generally humanitarian access is difficult in Rakhine, and in areas of Kachin and northern Shan not under government control.