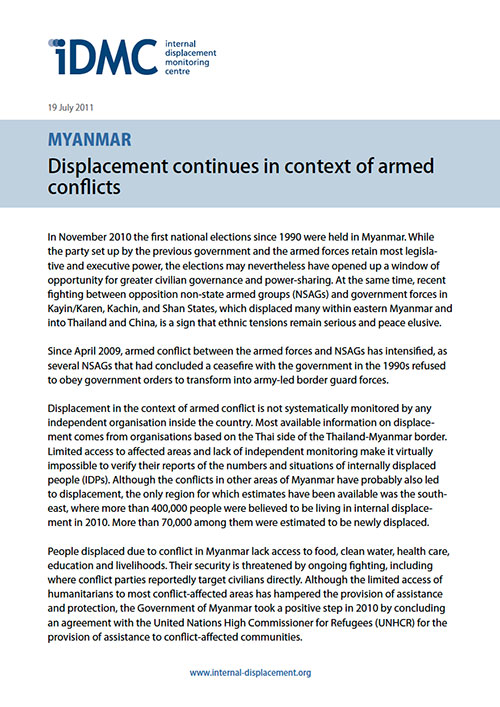 In November 2010 the first national elections since 1990 were held in Myanmar. While the party set up by the previous government and the armed forces retain most legislative and executive power, the elections may nevertheless have opened up a window of opportunity for greater civilian governance and power-sharing. At the same time, recent fighting between opposition non-state armed groups (NSAGs) and government forces in Kayin/Karen, Kachin, and Shan States, which displaced many within eastern Myanmar and into Thailand and China, is a sign that ethnic tensions remain serious and peace elusive.

Since April 2009, armed conflict between the armed forces and NSAGs has intensified, as several NSAGs that had concluded a ceasefire with the government in the 1990s refused to obey government orders to transform into army-led border guard forces.

Displacement in the context of armed conflict is not systematically monitored by any independent organisation inside the country. Most available information on displacement comes from organisations based on the Thai side of the Thailand-Myanmar border. Limited access to affected areas and lack of independent monitoring make it virtually impossible to verify their reports of the numbers and situations of internally displaced people (IDPs). Although the conflicts in other areas of Myanmar have probably also led to displacement, the only region for which estimates have been available was the south-east, where more than 400,000 people were believed to be living in internal displacement in 2010. More than 70,000 among them were estimated to be newly displaced.

People displaced due to conflict in Myanmar lack access to food, clean water, health care, education and livelihoods. Their security is threatened by ongoing fighting, including where conflict parties reportedly target civilians directly. Although the limited access of humanitarians to most conflict-affected areas has hampered the provision of assistance and protection, the Government of Myanmar took a positive step in 2010 by concluding an agreement with the United Nations High Commissioner for Refugees (UNHCR) for the provision of assistance to conflict-affected communities.