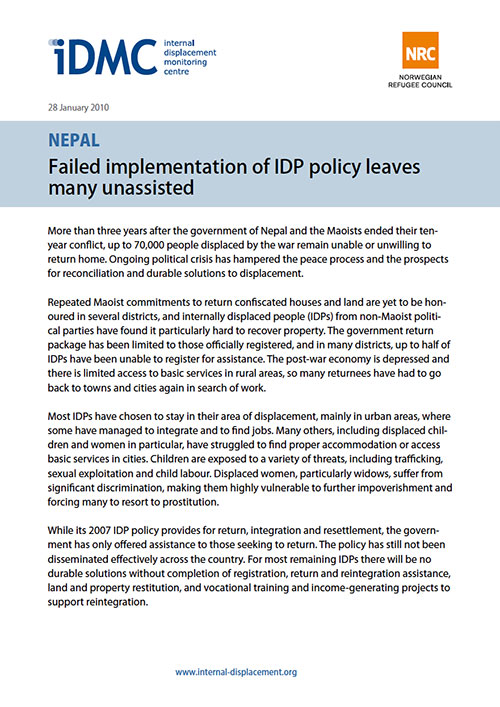 More than three years after the government of Nepal and the Maoists ended their ten-year conflict, up to 70,000 people displaced by the war remain unable or unwilling to return home. Ongoing political crisis has hampered the peace process and the prospects for reconciliation and durable solutions to displacement.

Repeated Maoist commitments to return confiscated houses and land are yet to be honoured in several districts, and internally displaced people (IDPs) from non-Maoist political parties have found it particularly hard to recover property. The government return package has been limited to those officially registered, and in many districts, up to half of IDPs have been unable to register for assistance. The post-war economy is depressed and there is limited access to basic services in rural areas, so many returnees have had to go back to towns and cities again in search of work.

Most IDPs have chosen to stay in their area of displacement, mainly in urban areas, where some have managed to integrate and to find jobs. Many others, including displaced children and women in particular, have struggled to find proper accommodation or access basic services in cities. Children are exposed to a variety of threats, including trafficking, sexual exploitation and child labour. Displaced women, particularly widows, suffer from significant discrimination, making them highly vulnerable to further impoverishment and forcing many to resort to prostitution.

While its 2007 IDP policy provides for return, integration and resettlement, the government has only offered assistance to those seeking to return. The policy has still not been disseminated effectively across the country. For most remaining IDPs there will be no durable solutions without completion of registration, return and reintegration assistance, land and property restitution, and vocational training and income-generating projects to support reintegration.