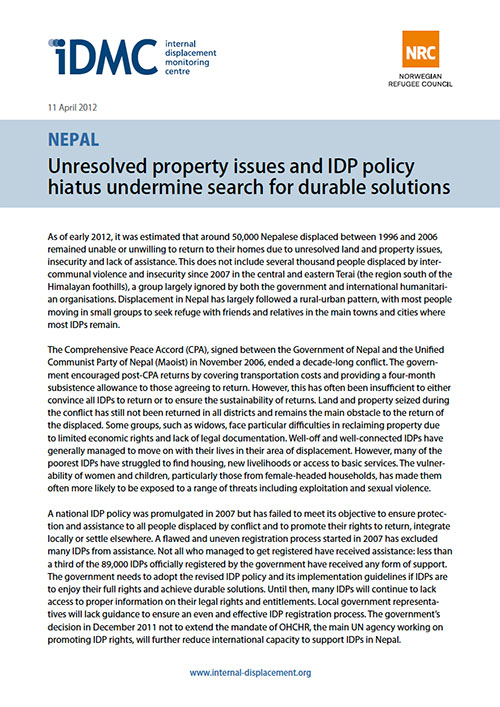 As of early 2012, it was estimated that around 50,000 Nepalese displaced between 1996 and 2006 remained unable or unwilling to return to their homes due to unresolved land and property issues, insecurity and lack of assistance. This does not include several thousand people displaced by inter-communal violence and insecurity since 2007 in the central and eastern Terai (the region south of the Himalayan foothills), a group largely ignored by both the government and international humanitarian organisations. Displacement in Nepal has largely followed a rural-urban pattern, with most people moving in small groups to seek refuge with friends and relatives in the main towns and cities where most IDPs remain.

The Comprehensive Peace Accord (CPA), signed between the Government of Nepal and the Unified Communist Party of Nepal (Maoist) in November 2006, ended a decade-long conflict. The govern-ment encouraged post-CPA returns by covering transportation costs and providing a four-month subsistence allowance to those agreeing to return. However, this has often been insufficient to either convince all IDPs to return or to ensure the sustainability of returns. Land and property seized during the conflict has still not been returned in all districts and remains the main obstacle to the return of the displaced. Some groups, such as widows, face particular difficulties in reclaiming property due to limited economic rights and lack of legal documentation. Well-off and well-connected IDPs have generally managed to move on with their lives in their area of displacement. However, many of the poorest IDPs have struggled to find housing, new livelihoods or access to basic services. The vulnerability of women and children, particularly those from female-headed households, has made them often more likely to be exposed to a range of threats including exploitation and sexual violence.

A national IDP policy was promulgated in 2007 but has failed to meet its objective to ensure protection and assistance to all people displaced by conflict and to promote their rights to return, integrate locally or settle elsewhere. A flawed and uneven registration process started in 2007 has excluded many IDPs from assistance. Not all who managed to get registered have received assistance: less than a third of the 89,000 IDPs officially registered by the government have received any form of support. The government needs to adopt the revised IDP policy and its implementation guidelines if IDPs are to enjoy their full rights and achieve durable solutions. Until then, many IDPs will continue to lack access to proper information on their legal rights and entitlements. Local government representatives will lack guidance to ensure an even and effective IDP registration process. The government’s decision in December 2011 not to extend the mandate of OHCHR, the main UN agency working on promoting IDP rights, will further reduce international capacity to support IDPs in Nepal.