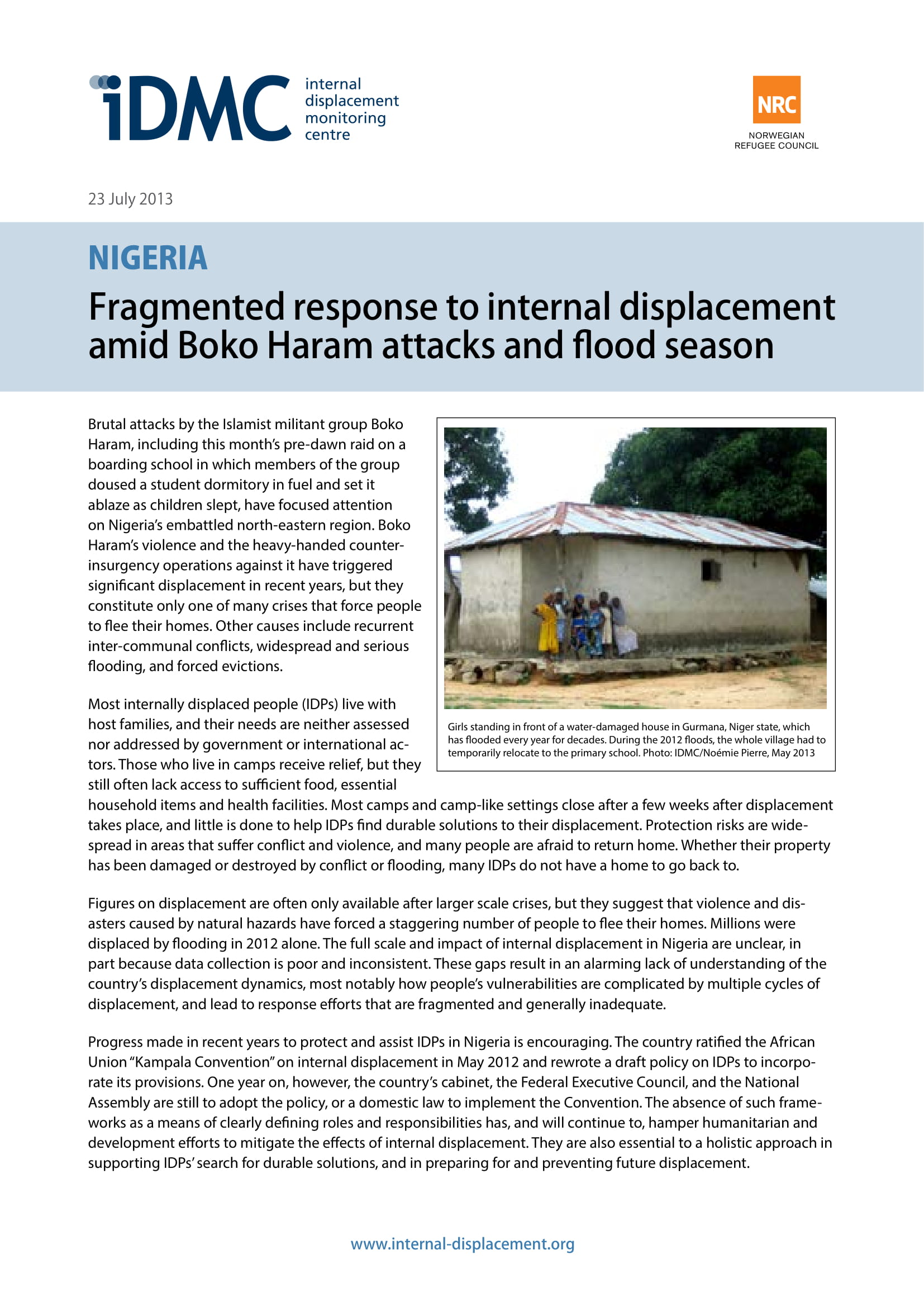 Brutal attacks by the Islamist militant group Boko Haram, including this month’s pre-dawn raid on a boarding school in which members of the group doused a student dormitory in fuel and set it ablaze as children slept, have focused attention on Nigeria’s embattled north-eastern region. Boko Haram’s violence and the heavy-handed counterinsurgency operations against it have triggered significant displacement in recent years, but they constitute only one of many crises that force people to flee their homes. Other causes include recurrent inter-communal conflicts, widespread and serious flooding, and forced evictions.

Most internally displaced people (IDPs) live with host families, and their needs are neither assessed nor addressed by government or international actors. Those who live in camps receive relief, but they still often lack access to sufficient food, essential household items and health facilities. Most camps and camp-like settings close after a few weeks after displacement takes place, and little is done to help IDPs find durable solutions to their displacement. Protection risks are widespread in areas that suffer conflict and violence, and many people are afraid to return home. Whether their property has been damaged or destroyed by conflict or flooding, many IDPs do not have a home to go back to.

Figures on displacement are often only available after larger scale crises, but they suggest that violence and disasters caused by natural hazards have forced a staggering number of people to flee their homes. Millions were displaced by flooding in 2012 alone. The full scale and impact of internal displacement in Nigeria are unclear, in part because data collection is poor and inconsistent. These gaps result in an alarming lack of understanding of the country’s displacement dynamics, most notably how people’s vulnerabilities are complicated by multiple cycles of displacement, and lead to response efforts that are fragmented and generally inadequate.

Progress made in recent years to protect and assist IDPs in Nigeria is encouraging. The country ratified the African Union “Kampala Convention” on internal displacement in May 2012 and rewrote a draft policy on IDPs to incorporate its provisions. One year on, however, the country’s cabinet, the Federal Executive Council, and the National Assembly are still to adopt the policy, or a domestic law to implement the Convention. The absence of such frameworks as a means of clearly defining roles and responsibilities has, and will continue to, hamper humanitarian and development efforts to mitigate the effects of internal displacement. They are also essential to a holistic approach in supporting IDPs’ search for durable solutions, and in preparing for and preventing future displacement.