Occupied Palestinian Territory: A policy of displacement and dispossession amid renewed conﬂict 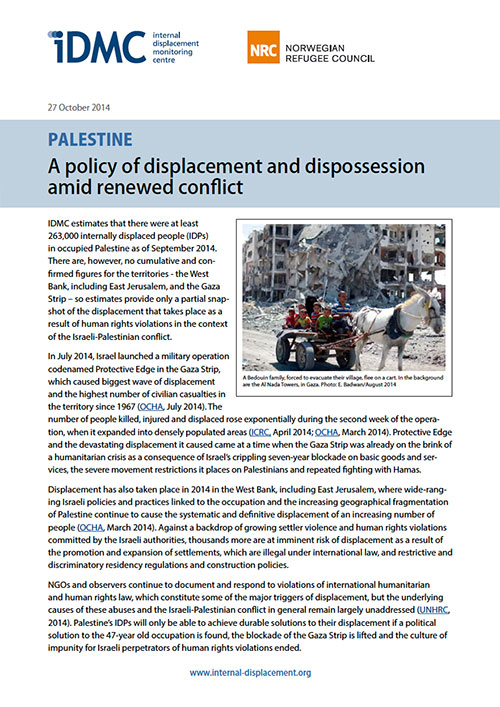 IDMC estimates that there were at least 263,000 internally displaced people (IDPs) in occupied Palestine as of September 2014. There are, however, no cumulative and confirmed figures for the territories - the West Bank, including East Jerusalem, and the Gaza Strip – so estimates provide only a partial snapshot of the displacement that takes place as a result of human rights violations in the context of the Israeli-Palestinian conflict.

In July 2014, Israel launched a military operation codenamed Protective Edge in the Gaza Strip, which caused the biggest wave of displacement and the highest number of civilian casualties in the territory since 1967 (OCHA, July 2014). The number of people killed, injured and displaced rose exponentially during the second week of the operation, when it expanded into densely populated areas (ICRC, April 2014; OCHA, March 2014). Protective Edge and the devastating displacement it caused came at a time when the Gaza Strip was already on the brink of a humanitarian crisis as a consequence of Israel’s crippling seven-year blockade on basic goods and services, the severe movement restrictions it places on Palestinians and repeated fighting with Hamas.

Displacement has also taken place in 2014 in the West Bank, including East Jerusalem, where wide-rang-ing Israeli policies and practices linked to the occupation and the increasing geographical fragmentation of Palestine continue to cause the systematic and definitive displacement of an increasing number of people (OCHA, March 2014). Against a backdrop of growing settler violence and human rights violations committed by the Israeli authorities, thousands more are at imminent risk of displacement as a result of the promotion and expansion of settlements, which are illegal under international law, and restrictive and discriminatory residency regulations and construction policies.

NGOs and observers continue to document and respond to violations of international humanitarian and human rights law, which constitute some of the major triggers of displacement, but the underlying causes of these abuses and the Israeli-Palestinian conflict in general remain largely unaddressed (UNHRC, 2014). Palestine’s IDPs will only be able to achieve durable solutions to their displacement if a political solution to the 47-year old occupation is found, the blockade of the Gaza Strip is lifted and the culture of impunity for Israeli perpetrators of human rights violations ended.