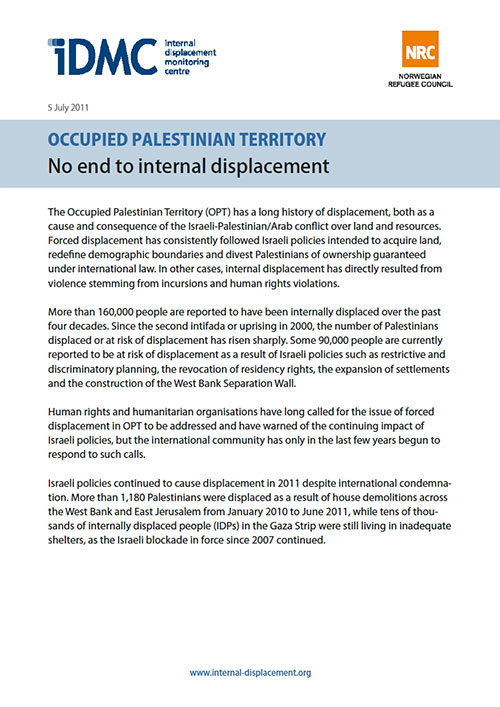 The Occupied Palestinian Territory (OPT) has a long history of displacement, both as a cause and consequence of the Israeli-Palestinian/Arab conflict over land and resources. Forced displacement has consistently followed Israeli policies intended to acquire land, redefine demographic boundaries and divest Palestinians of ownership guaranteed under international law. In other cases, internal displacement has directly resulted from violence stemming from incursions and human rights violations.

More than 160,000 people are reported to have been internally displaced over the past four decades. Since the second intifada or uprising in 2000, the number of Palestinians displaced or at risk of displacement has risen sharply. Some 90,000 people are currently reported to be at risk of displacement as a result of Israeli policies such as restrictive and discriminatory planning, the revocation of residency rights, the expansion of settlements and the construction of the West Bank Separation Wall.

Human rights and humanitarian organisations have long called for the issue of forced displacement in OPT to be addressed and have warned of the continuing impact of Israeli policies, but the international community has only in the last few years begun to respond to such calls.

Israeli policies continued to cause displacement in 2011 despite international condemna-tion. More than 1,180 Palestinians were displaced as a result of house demolitions across the West Bank and East Jerusalem from January 2010 to June 2011, while tens of thou-sands of internally displaced people (IDPs) in the Gaza Strip were still living in inadequate shelters, as the Israeli blockade in force since 2007 continued.