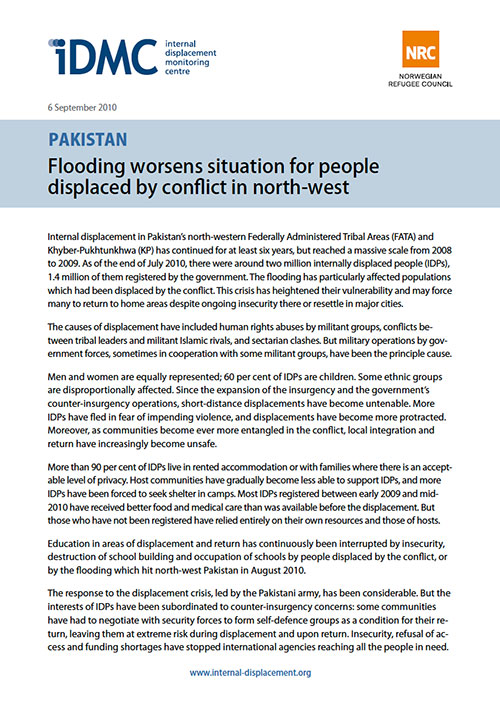 Internal displacement in Pakistan’s north-western Federally Administered Tribal Areas (FATA) and Khyber-Pukhtunkhwa (KP) has continued for at least six years, but reached a massive scale from 2008 to 2009. As of the end of July 2010, there were around two million internally displaced people (IDPs), 1.4 million of them registered by the government. The flooding has particularly affected populations which had been displaced by the conflict. This crisis has heightened their vulnerability and may force many to return to home areas despite ongoing insecurity there or resettle in major cities.

The causes of displacement have included human rights abuses by militant groups, conflicts be-tween tribal leaders and militant Islamic rivals, and sectarian clashes. But military operations by government forces, sometimes in cooperation with some militant groups, have been the principle cause.

Men and women are equally represented; 60 per cent of IDPs are children. Some ethnic groups are disproportionally affected. Since the expansion of the insurgency and the government’s counter-insurgency operations, short-distance displacements have become untenable. More IDPs have fled in fear of impending violence, and displacements have become more protracted. Moreover, as communities become ever more entangled in the conflict, local integration and return have increasingly become unsafe.

More than 90 per cent of IDPs live in rented accommodation or with families where there is an accept-able level of privacy. Host communities have gradually become less able to support IDPs, and more IDPs have been forced to seek shelter in camps. Most IDPs registered between early 2009 and mid-2010 have received better food and medical care than was available before the displacement. But those who have not been registered have relied entirely on their own resources and those of hosts.

Education in areas of displacement and return has continuously been interrupted by insecurity, destruction of school building and occupation of schools by people displaced by the conflict, or by the flooding which hit north-west Pakistan in August 2010.

The response to the displacement crisis, led by the Pakistani army, has been considerable. But the interests of IDPs have been subordinated to counter-insurgency concerns: some communities have had to negotiate with security forces to form self-defence groups as a condition for their re-turn, leaving them at extreme risk during displacement and upon return. Insecurity, refusal of ac-cess and funding shortages have stopped international agencies reaching all the people in need.