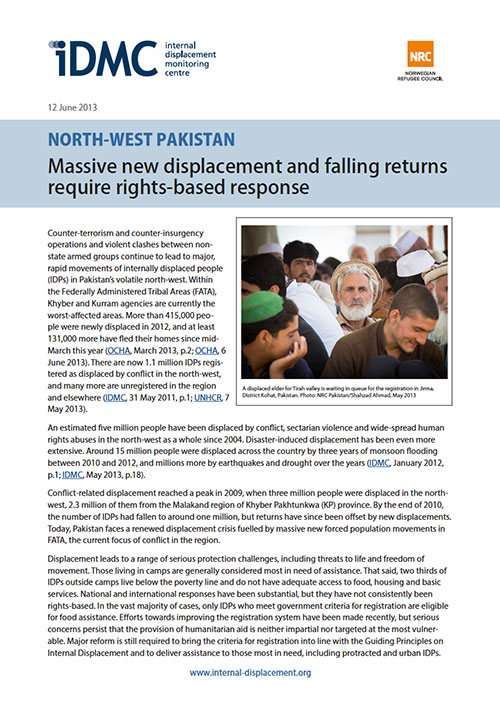 Counter-terrorism and counter-insurgency operations and violent clashes between non-state armed groups continue to lead to major, rapid movements of internally displaced people (IDPs) in Pakistan’s volatile north-west. Within the Federally Administered Tribal Areas (FATA), Khyber and Kurram agencies are currently the worst-affected areas. More than 415,000 people were newly displaced in 2012, and at least 131,000 more have fled their homes since mid-March this year (OCHA, March 2013, p.2; OCHA, 6 June 2013). There are now 1.1 million IDPs registered as displaced by conflict in the north-west, and many more are unregistered in the region and elsewhere (IDMC, 31 May 2011, p.1; UNHCR, 7 May 2013).

An estimated five million people have been displaced by conflict, sectarian violence and wide-spread human rights abuses in the north-west as a whole since 2004. Disaster-induced displacement has been even more extensive. Around 15 million people were displaced across the country by three years of monsoon flooding between 2010 and 2012, and millions more by earthquakes and drought over the years (IDMC, January 2012, p.1; IDMC, May 2013, p.18).

Conflict-related displacement reached a peak in 2009, when three million people were displaced in the north-west, 2.3 million of them from the Malakand region of Khyber Pakhtunkwa (KP) province. By the end of 2010, the number of IDPs had fallen to around one million, but returns have since been offset by new displacements. Today, Pakistan faces a renewed displacement crisis fuelled by massive new forced population movements in FATA, the current focus of conflict in the region.

Displacement leads to a range of serious protection challenges, including threats to life and freedom of movement. Those living in camps are generally considered most in need of assistance. That said, two thirds of IDPs outside camps live below the poverty line and do not have adequate access to food, housing and basic services. National and international responses have been substantial, but they have not consistently been rights-based. In the vast majority of cases, only IDPs who meet government criteria for registration are eligible for food assistance. Efforts towards improving the registration system have been made recently, but serious concerns persist that the provision of humanitarian aid is neither impartial nor targeted at the most vulnerable. Major reform is still required to bring the criteria for registration into line with the Guiding Principles on Internal Displacement and to deliver assistance to those most in need, including protracted and urban IDPs.