Pakistan: Solutions to displacement elusive for both new and protracted IDPs 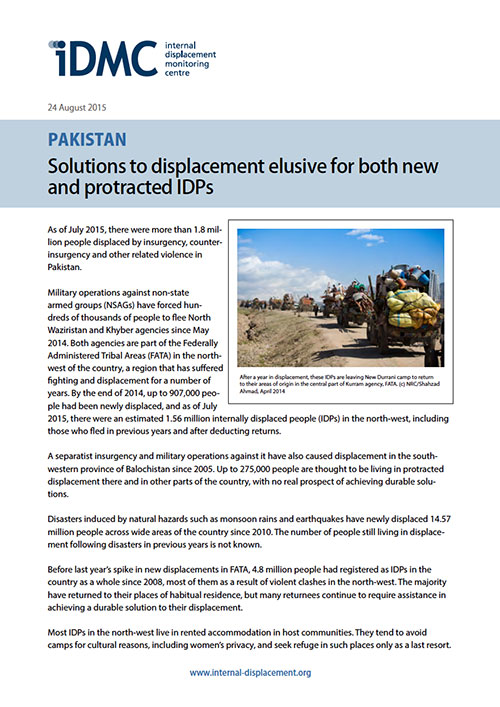 As of July 2015, there were more than 1.8 million people displaced by insurgency, counter-insurgency and other related violence in Pakistan.

Military operations against non-state armed groups (NSAGs) have forced hundreds of thousands of people to flee North Waziristan and Khyber agencies since May 2014. Both agencies are part of the Federally Administered Tribal Areas (FATA) in the north-west of the country, a region that has suffered fighting and displacement for a number of years. By the end of 2014, up to 907,000 people had been newly displaced, and as of July 2015, there were an estimated 1.56 million internally displaced people (IDPs) in the north-west, including those who fled in previous years and after deducting returns.

A separatist insurgency and military operations against it have also caused displacement in the south-western province of Balochistan since 2005. Up to 275,000 people are thought to be living in protracted displacement there and in other parts of the country, with no real prospect of achieving durable solutions.

Disasters induced by natural hazards such as monsoon rains and earthquakes have newly displaced 14.57 million people across wide areas of the country since 2010. The number of people still living in displacement following disasters in previous years is not known.

Before last year’s spike in new displacements in FATA, 4.8 million people had registered as IDPs in the country as a whole since 2008, most of them as a result of violent clashes in the north-west. The majority have returned to their places of habitual residence, but many returnees continue to require assistance in achieving a durable solution to their displacement.

Most IDPs in the north-west live in rented accommodation in host communities. They tend to avoid camps for cultural reasons, including women’s privacy, and seek refuge in such places only as a last resort.