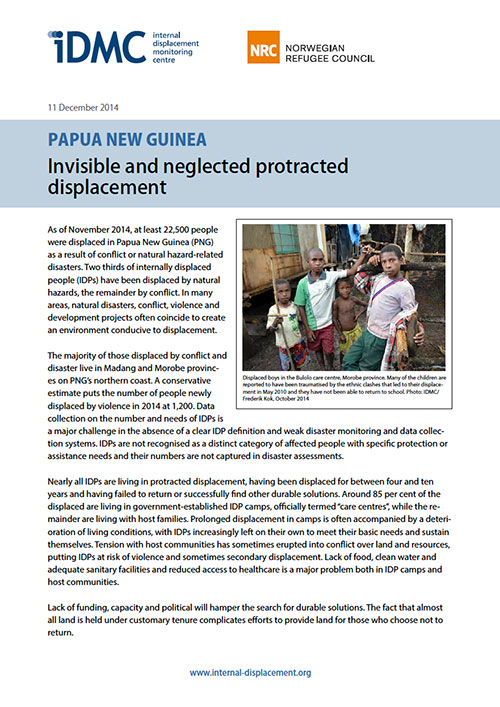 As of November 2014, at least 22,500 people were displaced in Papua New Guinea (PNG) as a result of conflict or natural hazard-related disasters. Two thirds of internally displaced people (IDPs) have been displaced by natural hazards, the remainder by conflict. In many areas, natural disasters, conflict, violence and development projects often coincide to create an environment conducive to displacement.

The majority of those displaced by conflict and disaster live in Madang and Morobe provinces on PNG’s northern coast. A conservative estimate puts the number of people newly displaced by violence in 2014 at 1,200. Data collection on the number and needs of IDPs is a major challenge in the absence of a clear IDP definition and weak disaster monitoring and data collection systems. IDPs are not recognised as a distinct category of affected people with specific protection or assistance needs and their numbers are not captured in disaster assessments.

Nearly all IDPs are living in protracted displacement, having been displaced for between four and ten years and having failed to return or successfully find other durable solutions. Around 85 per cent of the displaced are living in government-established IDP camps, officially termed “care centres”, while the remainder are living with host families. Prolonged displacement in camps is often accompanied by a deterioration of living conditions, with IDPs increasingly left on their own to meet their basic needs and sustain themselves. Tension with host communities has sometimes erupted into conflict over land and resources, putting IDPs at risk of violence and sometimes secondary displacement. Lack of food, clean water and adequate sanitary facilities and reduced access to healthcare is a major problem both in IDP camps and host communities.

Lack of funding, capacity and political will hamper the search for durable solutions. The fact that almost all land is held under customary tenure complicates efforts to provide land for those who choose not to return.