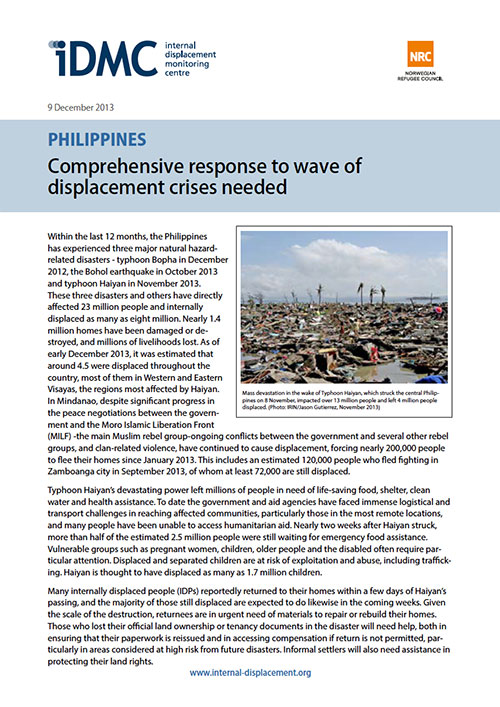 Within the last 12 months, the Philippines has experienced three major natural hazard-related disasters - typhoon Bopha in December 2012, the Bohol earthquake in October 2013 and typhoon Haiyan in November 2013. These three disasters and others have directly affected 23 million people and internally displaced as many as eight million. Nearly 1.4 million homes have been damaged or destroyed, and millions of livelihoods lost. As of early December 2013, it was estimated that around 4.5 were displaced throughout the country, most of them in Western and Eastern Visayas, the regions most affected by Haiyan. In Mindanao, despite significant progress in the peace negotiations between the government and the Moro Islamic Liberation Front (MILF) -the main Muslim rebel group-ongoing conflicts between the government and several other rebel groups, and clan-related violence, have continued to cause displacement, forcing nearly 200,000 people to flee their homes since January 2013. This includes an estimated 120,000 people who fled fighting in Zamboanga city in September 2013, of whom at least 72,000 are still displaced.

Typhoon Haiyan’s devastating power left millions of people in need of life-saving food, shelter, clean water and health assistance. To date the government and aid agencies have faced immense logistical and transport challenges in reaching affected communities, particularly those in the most remote locations, and many people have been unable to access humanitarian aid. Nearly two weeks after Haiyan struck, more than half of the estimated 2.5 million people were still waiting for emergency food assistance. Vulnerable groups such as pregnant women, children, older people and the disabled often require particular attention. Displaced and separated children are at risk of exploitation and abuse, including trafficking. Haiyan is thought to have displaced as many as 1.7 million children.

Many internally displaced people (IDPs) reportedly returned to their homes within a few days of Haiyan’s passing, and the majority of those still displaced are expected to do likewise in the coming weeks. Given the scale of the destruction, returnees are in urgent need of materials to repair or rebuild their homes. Those who lost their official land ownership or tenancy documents in the disaster will need help, both in ensuring that their paperwork is reissued and in accessing compensation if return is not permitted, particularly in areas considered at high risk from future disasters. Informal settlers will also need assistance in protecting their land rights.