Philippines: Durable solutions still out of sight for many IDPs and returnees in Mindanao 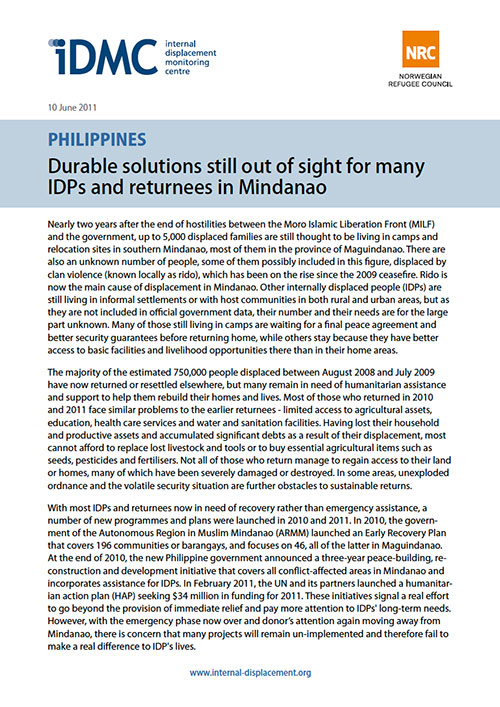 Nearly two years after the end of hostilities between the Moro Islamic Liberation Front (MILF) and the government, up to 5,000 displaced families are still thought to be living in camps and relocation sites in southern Mindanao, most of them in the province of Maguindanao. There are also an unknown number of people, some of them possibly included in this figure, displaced by clan violence (known locally as rido), which has been on the rise since the 2009 ceasefire. Rido is now the main cause of displacement in Mindanao. Other internally displaced people (IDPs) are still living in informal settlements or with host communities in both rural and urban areas, but as they are not included in official government data, their number and their needs are for the large part unknown. Many of those still living in camps are waiting for a final peace agreement and better security guarantees before returning home, while others stay because they have better access to basic facilities and livelihood opportunities there than in their home areas.

The majority of the estimated 750,000 people displaced between August 2008 and July 2009 have now returned or resettled elsewhere, but many remain in need of humanitarian assistance and support to help them rebuild their homes and lives. Most of those who returned in 2010 and 2011 face similar problems to the earlier returnees - limited access to agricultural assets, education, health care services and water and sanitation facilities. Having lost their household and productive assets and accumulated significant debts as a result of their displacement, most cannot afford to replace lost livestock and tools or to buy essential agricultural items such as seeds, pesticides and fertilisers. Not all of those who return manage to regain access to their land or homes, many of which have been severely damaged or destroyed. In some areas, unexploded ordnance and the volatile security situation are further obstacles to sustainable returns.

With most IDPs and returnees now in need of recovery rather than emergency assistance, a number of new programmes and plans were launched in 2010 and 2011. In 2010, the government of the Autonomous Region in Muslim Mindanao (ARMM) launched an Early Recovery Plan that covers 196 communities or barangays, and focuses on 46, all of the latter in Maguindanao. At the end of 2010, the new Philippine government announced a three-year peace-building, re-construction and development initiative that covers all conflict-affected areas in Mindanao and incorporates assistance for IDPs. In February 2011, the UN and its partners launched a humanitarian action plan (HAP) seeking $34 million in funding for 2011. These initiatives signal a real effort to go beyond the provision of immediate relief and pay more attention to IDPs' long-term needs. However, with the emergency phase now over and donor’s attention again moving away from Mindanao, there is concern that many projects will remain un-implemented and therefore fail to make a real difference to IDP's lives.