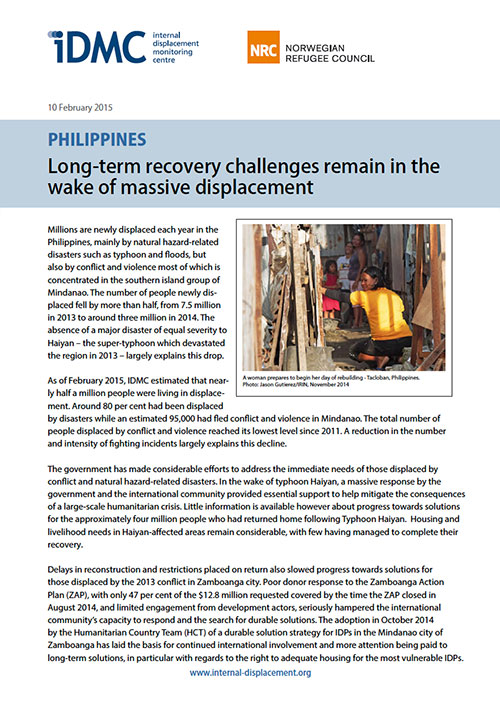 Millions are newly displaced each year in the Philippines, mainly by natural hazard-related disasters such as typhoon and floods, but also by conflict and violence most of which is concentrated in the southern island group of Mindanao. The number of people newly displaced fell by more than half, from 7.5 million in 2013 to around three million in 2014. The absence of a major disaster of equal severity to Haiyan – the super-typhoon which devastated the region in 2013 – largely explains this drop.

As of February 2015, IDMC estimated that nearly half a million people were living in displacement. Around 80 per cent had been displaced by disasters while an estimated 95,000 had fled conflict and violence in Mindanao. The total number of people displaced by conflict and violence reached its lowest level since 2011. A reduction in the number and intensity of fighting incidents largely explains this decline.

The government has made considerable efforts to address the immediate needs of those displaced by conflict and natural hazard-related disasters. In the wake of typhoon Haiyan, a massive response by the government and the international community provided essential support to help mitigate the consequences of a large-scale humanitarian crisis. Little information is available however about progress towards solutions for the approximately four million people who had returned home following Typhoon Haiyan.  Housing and livelihood needs in Haiyan-affected areas remain considerable, with few having managed to complete their recovery.

Delays in reconstruction and restrictions placed on return also slowed progress towards solutions for those displaced by the 2013 conflict in Zamboanga city. Poor donor response to the Zamboanga Action Plan (ZAP), with only 47 per cent of the $12.8 million requested covered by the time the ZAP closed in August 2014, and limited engagement from development actors, seriously hampered the international community’s capacity to respond and the search for durable solutions. The adoption in October 2014 by the Humanitarian Country Team (HCT) of a durable solution strategy for IDPs in the Mindanao city of Zamboanga has laid the basis for continued international involvement and more attention being paid to long-term solutions, in particular with regards to the right to adequate housing for the most vulnerable IDPs.