Reducing displacement risk in the Greater Horn of Africa 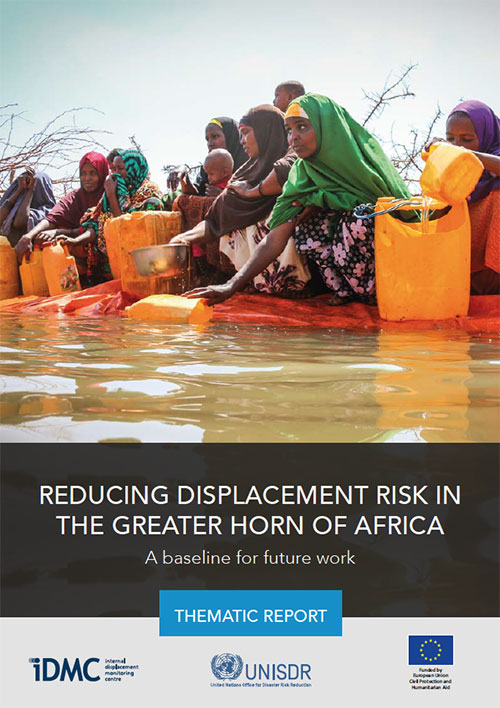 The need to address the risk and impacts of disaster displacement is a global and regional policy priority. To do so, however, such risk must be measured, and governments and other agencies need a baseline against which to measure their progress. To address this need,IDMC has developed a methodology to estimate displacement risk associated with sudden-onset natural hazards, and the result is the first fully probabilistic assessment of the phenomenon for the Greater Horn of Africa.

Displacement in the Greater Horn of Africa is highly complex because a range of interlinked triggers and drivers are at play. Disasters increase competition for land and resources, which can lead to violence and conflict. In turn, this can also increase communities’ vulnerability to the impacts of natural hazards. Furthermore, the region is among those worst affected by the multiple effects of climate change including above average temperature, excessive or insufficient rainfall, desertification and environmental degradation.

• Sudden-onset natural hazards, primarily floods, triggered more than 600,000 new displacements in 2016 in the Greater Horn of Africa.
• Slow-onset events such as drought and environmental degradation added considerably to the figures, but quantifying their impacts is difficult.
• At the same time, conflict and violence triggered at least 800,000 new displacements in 2016.

Launch of GRID 2022
Events
How can the Education in Emergencies sector better respond to the climate emergency?
Events
More than half a million displacements across south-eastern Africa as five tropical storms strike in two months

Media Centre
Five examples of gender-sensitive solutions to displacement linked with climate change
Expert opinion
Science warns us that climate change will drive more people from their homes. So what should we do about it?