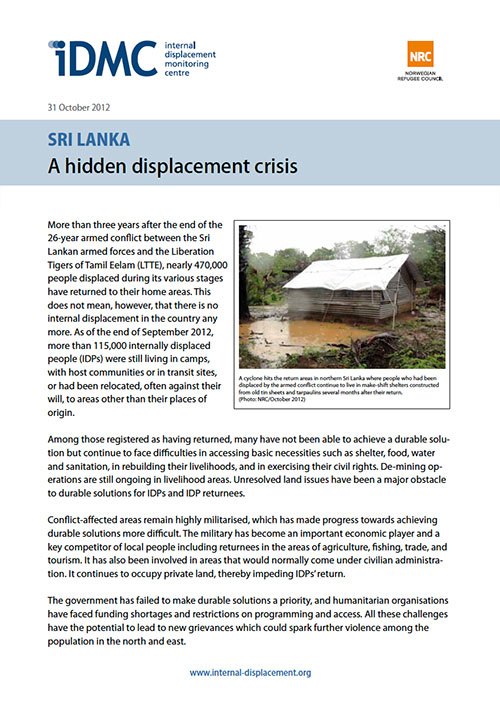 More than three years after the end of the 26-year armed conflict between the Sri Lankan armed forces and the Liberation Tigers of Tamil Eelam (LTTE), nearly 470,000 people displaced during its various stages have returned to their home areas. This does not mean, however, that there is no internal displacement in the country any more. As of the end of September 2012, more than 115,000 internally displaced people (IDPs) were still living in camps, with host communities or in transit sites, or had been relocated, often against their will, to areas other than their places of origin.

Among those registered as having returned, many have not been able to achieve a durable solution but continue to face difficulties in accessing basic necessities such as shelter, food, water and sanitation, in rebuilding their livelihoods, and in exercising their civil rights. De-mining operations are still ongoing in livelihood areas. Unresolved land issues have been a major obstacle to durable solutions for IDPs and IDP returnees.

Conflict-affected areas remain highly militarised, which has made progress towards achieving durable solutions more difficult. The military has become an important economic player and a key competitor of local people including returnees in the areas of agriculture, fishing, trade, and tourism. It has also been involved in areas that would normally come under civilian administration. It continues to occupy private land, thereby impeding IDPs’ return.

The government has failed to make durable solutions a priority, and humanitarian organisations have faced funding shortages and restrictions on programming and access. All these challenges have the potential to lead to new grievances which could spark further violence among the population in the north and east.