Sri Lanka: Almost ﬁve years of peace but tens of thousands of war-displaced still without solution 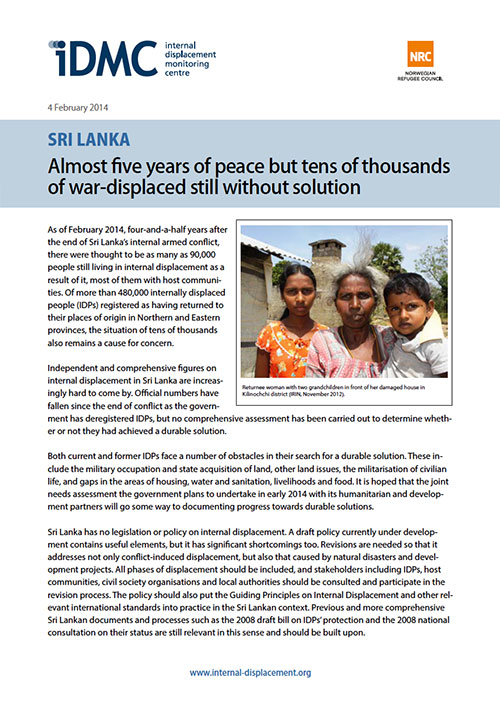 As of February 2014, four-and-a-half years after the end of Sri Lanka’s internal armed conflict, there were thought to be as many as 90,000 people still living in internal displacement as a result of it, most of them with host communities. Of more than 480,000 internally displaced people (IDPs) registered as having returned to their places of origin in Northern and Eastern provinces, the situation of tens of thousands also remains a cause for concern.

Independent and comprehensive figures on internal displacement in Sri Lanka are increasingly hard to come by. Official numbers have fallen since the end of conflict as the government has deregistered IDPs, but no comprehensive assessment has been carried out to determine whether or not they had achieved a durable solution.

Both current and former IDPs face a number of obstacles in their search for a durable solution. These include the military occupation and state acquisition of land, other land issues, the militarisation of civilian life, and gaps in the areas of housing, water and sanitation, livelihoods and food. It is hoped that the joint needs assessment the government plans to undertake in early 2014 with its humanitarian and develop-ment partners will go some way to documenting progress towards durable solutions.

Sri Lanka has no legislation or policy on internal displacement. A draft policy currently under development contains useful elements, but it has significant shortcomings too. Revisions are needed so that it addresses not only conflict-induced displacement, but also that caused by natural disasters and development projects. All phases of displacement should be included, and stakeholders including IDPs, host communities, civil society organisations and local authorities should be consulted and participate in the revision process. The policy should also put the Guiding Principles on Internal Displacement and other relevant international standards into practice in the Sri Lankan context. Previous and more comprehensive Sri Lankan documents and processes such as the 2008 draft bill on IDPs’ protection and the 2008 national consultation on their status are still relevant in this sense and should be built upon.