Sudan: Other crises distract attention from tremendous needs of IDPs 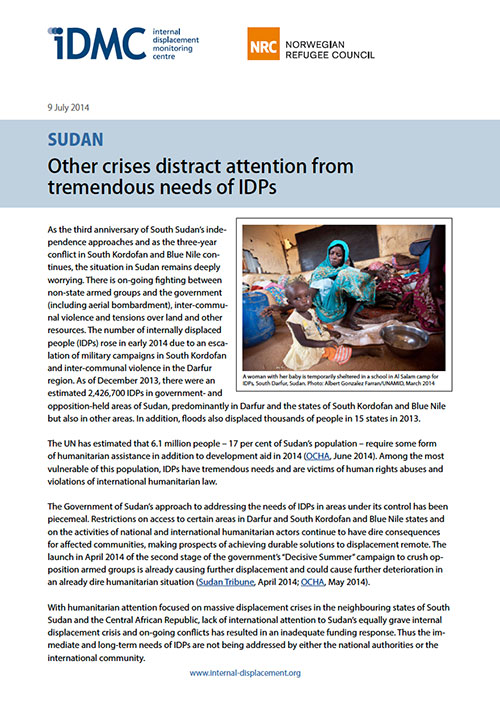 As the third anniversary of South Sudan’s independence approaches and as the three-year conflict in South Kordofan and Blue Nile continues, the situation in Sudan remains deeply worrying. There is on-going fighting between non-state armed groups and the government (including aerial bombardment), inter-communal violence and tensions over land and other resources. The number of internally displaced people (IDPs) rose in early 2014 due to an escalation of military campaigns in South Kordofan and inter-communal violence in the Darfur region. As of December 2013, there were an estimated 2,426,700 IDPs in government- and opposition-held areas of Sudan, predominantly in Darfur and the states of South Kordofan and Blue Nile but also in other areas. In addition, floods also displaced thousands of people in 15 states in 2013.

The UN has estimated that 6.1 million people – 17 per cent of Sudan’s population – require some form of humanitarian assistance in addition to development aid in 2014 (OCHA, June 2014). Among the most vulnerable of this population, IDPs have tremendous needs and are victims of human rights abuses and violations of international humanitarian law.

The Government of Sudan’s approach to addressing the needs of IDPs in areas under its control has been piecemeal. Restrictions on access to certain areas in Darfur and South Kordofan and Blue Nile states and on the activities of national and international humanitarian actors continue to have dire consequences for affected communities, making prospects of achieving durable solutions to displacement remote. The launch in April 2014 of the second stage of the government’s “Decisive Summer” campaign to crush opposition armed groups is already causing further displacement and could cause further deterioration in an already dire humanitarian situation (Sudan Tribune, April 2014; OCHA, May 2014).

With humanitarian attention focused on massive displacement crises in the neighbouring states of South Sudan and the Central African Republic, lack of international attention to Sudan’s equally grave internal displacement crisis and on-going conflicts has resulted in an inadequate funding response. Thus the immediate and long-term needs of IDPs are not being addressed by either the national authorities or the international community.