Syria: A full-scale displacement and humanitarian crisis with no solutions in sight 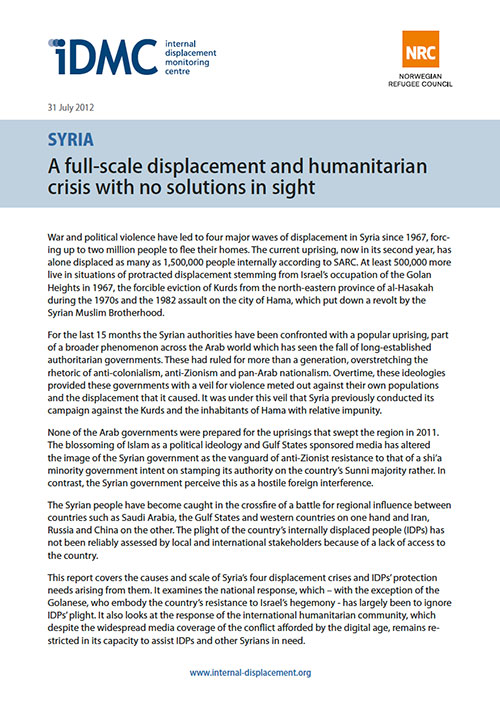 War and political violence have led to four major waves of displacement in Syria since 1967, forcing up to two million people to flee their homes. The current uprising, now in its second year, has alone displaced as many as 1,500,000 people internally according to SARC. At least 500,000 more live in situations of protracted displacement stemming from Israel’s occupation of the Golan Heights in 1967, the forcible eviction of Kurds from the north-eastern province of al-Hasakah during the 1970s and the 1982 assault on the city of Hama, which put down a revolt by the Syrian Muslim Brotherhood.

For the last 15 months the Syrian authorities have been confronted with a popular uprising, part of a broader phenomenon across the Arab world which has seen the fall of long-established authoritarian governments. These had ruled for more than a generation, overstretching the rhetoric of anti-colonialism, anti-Zionism and pan-Arab nationalism. Overtime, these ideologies provided these governments with a veil for violence meted out against their own populations and the displacement that it caused. It was under this veil that Syria previously conducted its campaign against the Kurds and the inhabitants of Hama with relative impunity.

None of the Arab governments were prepared for the uprisings that swept the region in 2011. The blossoming of Islam as a political ideology and Gulf States sponsored media has altered the image of the Syrian government as the vanguard of anti-Zionist resistance to that of a shi’a minority government intent on stamping its authority on the country’s Sunni majority rather. In contrast, the Syrian government perceive this as a hostile foreign interference.

The Syrian people have become caught in the crossfire of a battle for regional influence between countries such as Saudi Arabia, the Gulf States and western countries on one hand and Iran, Russia and China on the other. The plight of the country’s internally displaced people (IDPs) has not been reliably assessed by local and international stakeholders because of a lack of access to the country.

This report covers the causes and scale of Syria’s four displacement crises and IDPs’ protection needs arising from them. It examines the national response, which – with the exception of the Golanese, who embody the country’s resistance to Israel’s hegemony - has largely been to ignore IDPs’ plight. It also looks at the response of the international humanitarian community, which despite the widespread media coverage of the conflict afforded by the digital age, remains re-stricted in its capacity to assist IDPs and other Syrians in need.