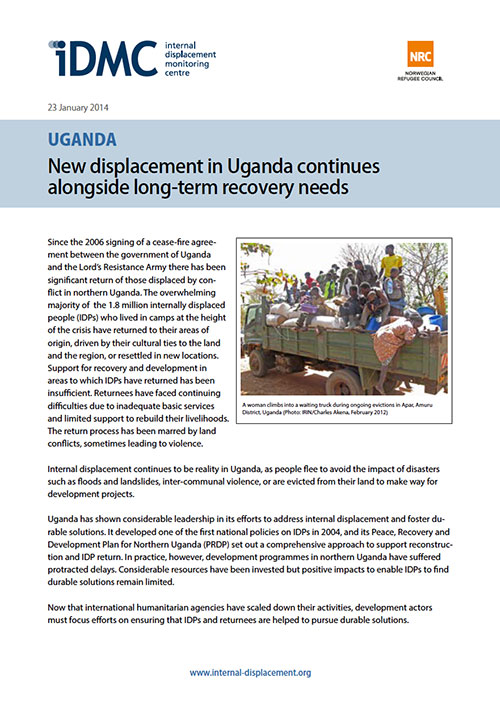 Since the 2006 signing of a cease-fire agreement between the government of Uganda and the Lord’s Resistance Army there has been significant return of those displaced by conflict in northern Uganda. The overwhelming majority of  the 1.8 million internally displaced people (IDPs) who lived in camps at the height of the crisis have returned to their areas of origin, driven by their cultural ties to the land and the region, or resettled in new locations. Support for recovery and development in areas to which IDPs have returned has been insufficient. Returnees have faced continuing difficulties due to inadequate basic services and limited support to rebuild their livelihoods. The return process has been marred by land conflicts, sometimes leading to violence.

Internal displacement continues to be reality in Uganda, as people flee to avoid the impact of disasters such as floods and landslides, inter-communal violence, or are evicted from their land to make way for development projects.

Uganda has shown considerable leadership in its efforts to address internal displacement and foster durable solutions. It developed one of the first national policies on IDPs in 2004, and its Peace, Recovery and Development Plan for Northern Uganda (PRDP) set out a comprehensive approach to support reconstruction and IDP return. In practice, however, development programmes in northern Uganda have suffered protracted delays. Considerable resources have been invested but positive impacts to enable IDPs to find durable solutions remain limited.

Now that international humanitarian agencies have scaled down their activities, development actors must focus efforts on ensuring that IDPs and returnees are helped to pursue durable solutions.