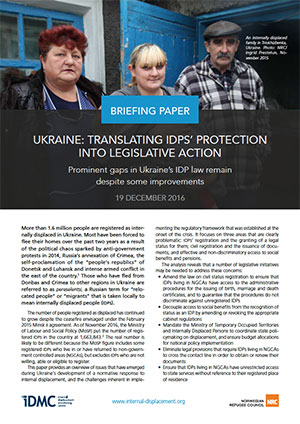 More than 1.6 million people are registered as internally displaced in Ukraine. Most have been forced to flee their homes over the past two years as a result of the political chaos sparked by anti-government
protests in 2014, Russia’s annexation of Crimea, the self-proclamation of the “people’s republics” of Donetsk and Luhansk and intense armed conflict in the east of the country.

This paper provides an overview of issues that have emerged during Ukraine’s development of a normative response to internal displacement, and the challenges inherent in implementing the regulatory framework that was established at the onset of the crisis. It focuses on three areas that are clearly problematic: IDPs’ registration and the granting of a legal status for them; civil registration and the issuance of documents;and effective and non-discriminatory access to social benefits and pensions.

Media Centre
Uprooted and overlooked: Why people with disabilities fleeing conflict and violence are among those most at risk
Expert opinion
Climate impacts as drivers of displacement: science, human rights and policy response
Events
From Science to Policy and Action: Human Mobility in Times of Climate Change
Events
Building on the momentum