Workshop Report - Kampala Convention: from ratification to domestication and operationalisation 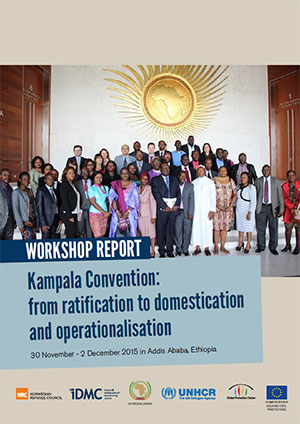 The Kampala Convention, adopted in 2009, became legally binding on all African Union (AU) states that agreed to ratify it in only three years.

Since then the Convention has gained increasing support and other regions in the world look at it as an example of a common framework assisting prevention and response to displacement, potentially to be replicated.

The workshop that was held in Addis Ababa in December 2015 revealed that additional efforts are required to ensure that this instrument is duly integrated in the legislation of the states parties and for its provisions to be fully implemented. Under the Task Team on Law and Policy, IDMC-NRC and UNHCR partnered with the AU Commission to celebrate the third anniversary of the entry into force and to discuss on the possible way forward in six countries in the African continent.

Media Centre
Climate impacts as drivers of displacement: science, human rights and policy response
Events
From Science to Policy and Action: Human Mobility in Times of Climate Change
Events
Building on the momentum

Publication
Rethinking returns in the Migration Pact: How the EU can avoid creating new IDPs
Expert opinion
Internal displacement is not an acceptable alternative to international protection
Expert opinion