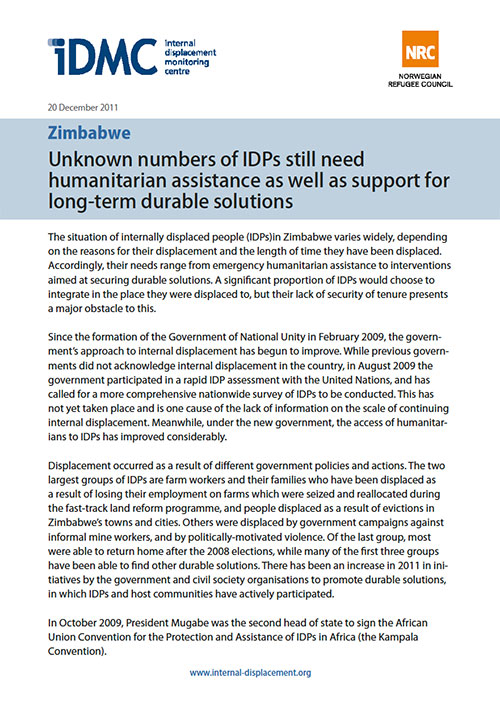 The situation of internally displaced people (IDPs)in Zimbabwe varies widely, depending on the reasons for their displacement and the length of time they have been displaced. Accordingly, their needs range from emergency humanitarian assistance to interventions aimed at securing durable solutions. A significant proportion of IDPs would choose to integrate in the place they were displaced to, but their lack of security of tenure presents a major obstacle to this.

Displacement occurred as a result of different government policies and actions. The two largest groups of IDPs are farm workers and their families who have been displaced as a result of losing their employment on farms which were seized and reallocated during the fast-track land reform programme, and people displaced as a result of evictions in Zimbabwe’s towns and cities. Others were displaced by government campaigns against informal mine workers, and by politically-motivated violence. Of the last group, most were able to return home after the 2008 elections, while many of the first three groups have been able to find other durable solutions. There has been an increase in 2011 in initiatives by the government and civil society organisations to promote durable solutions, in which IDPs and host communities have actively participated.

In October 2009, President Mugabe was the second head of state to sign the African Union Convention for the Protection and Assistance of IDPs in Africa (the Kampala Convention).