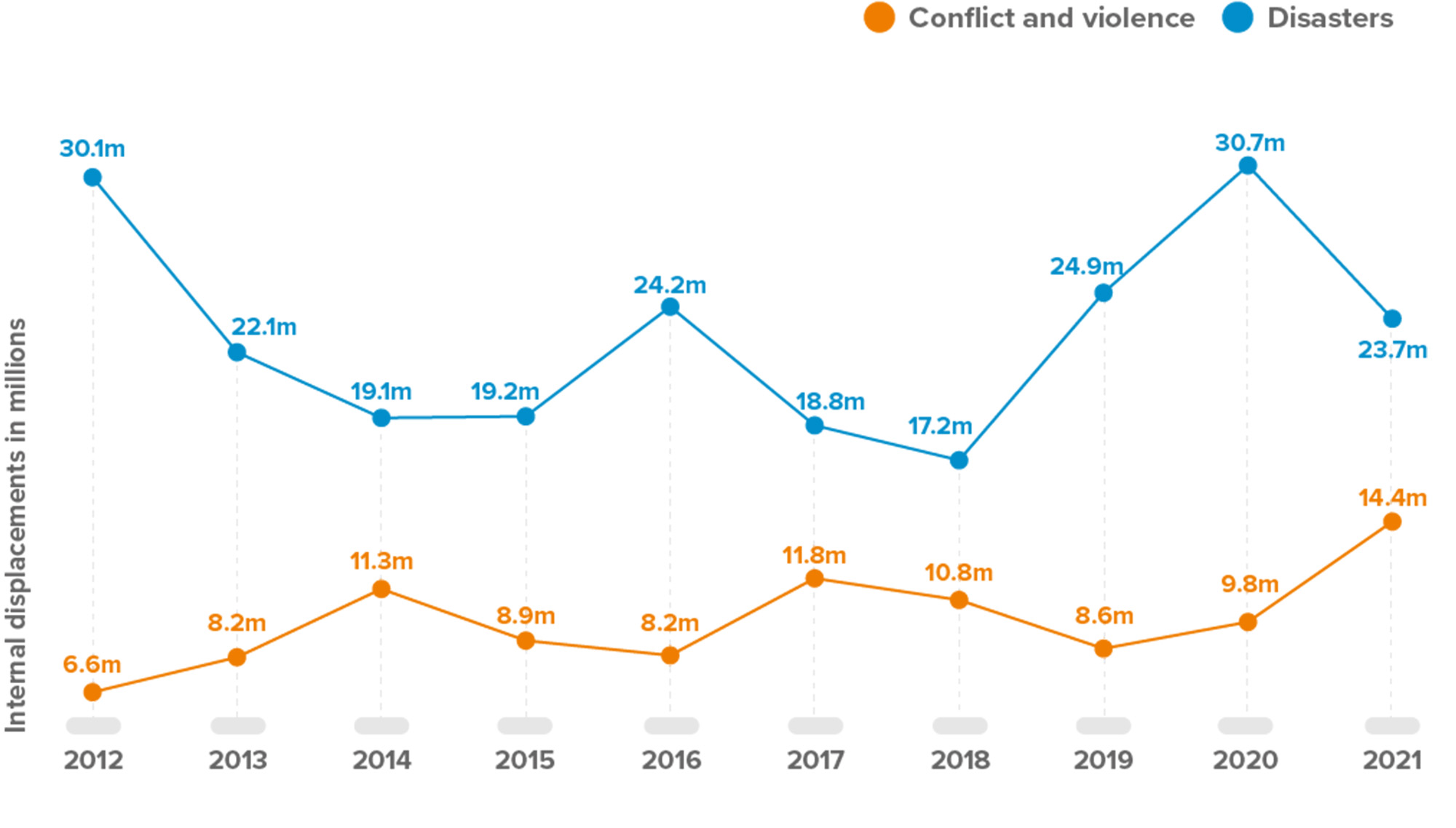 * Due to rounding, some totals may not correspond with the sum of the separate figures. 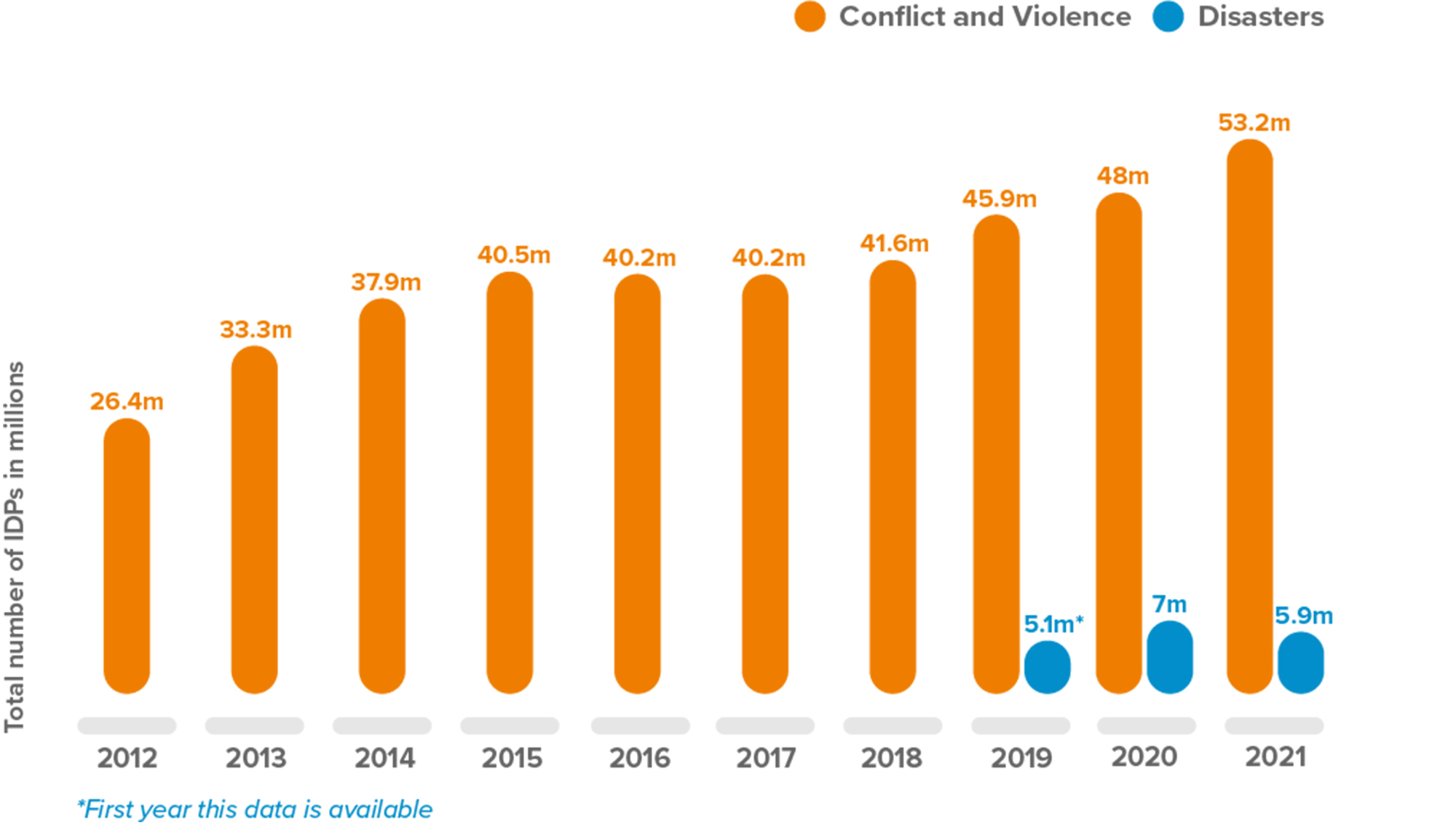 How to read our data 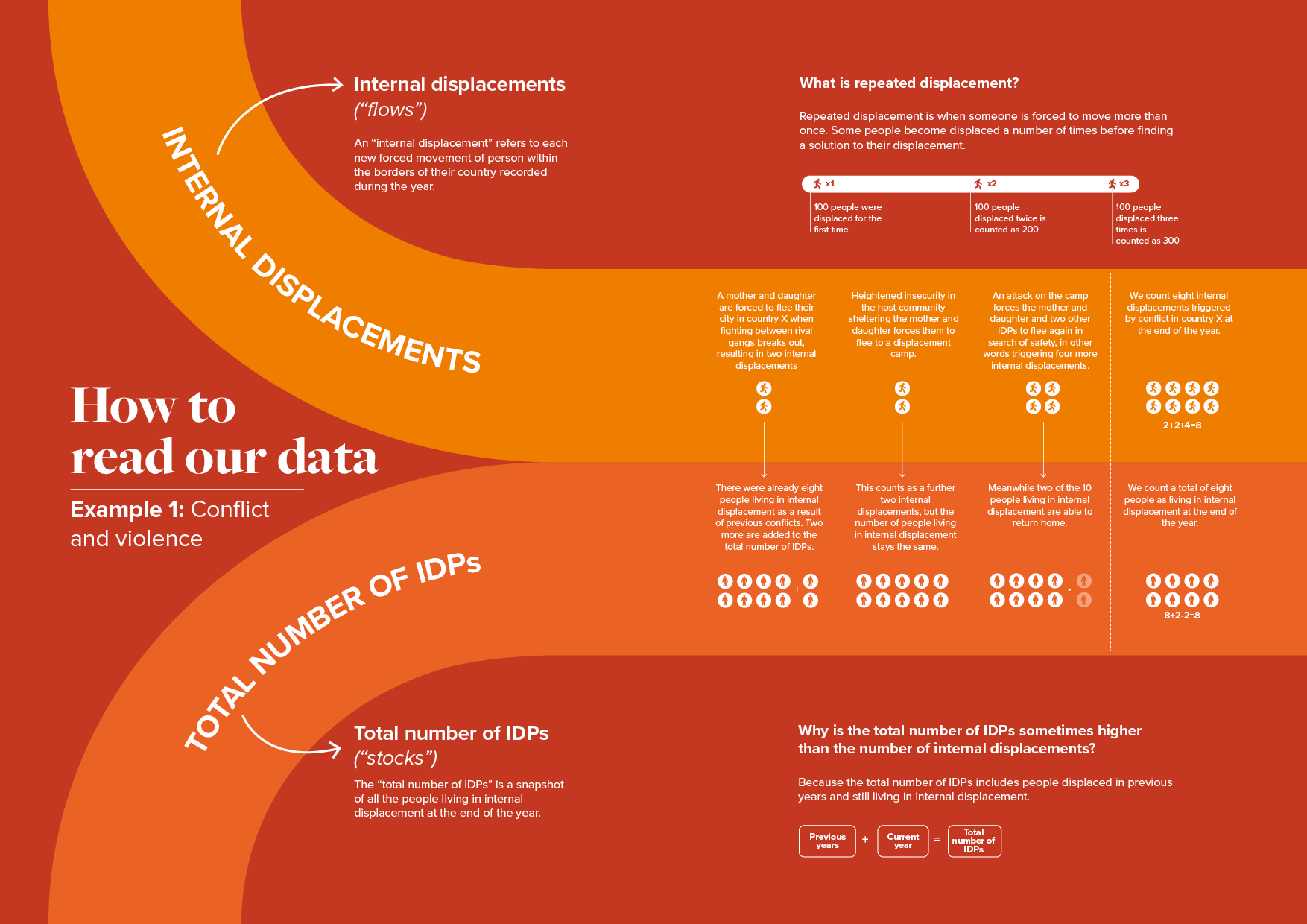 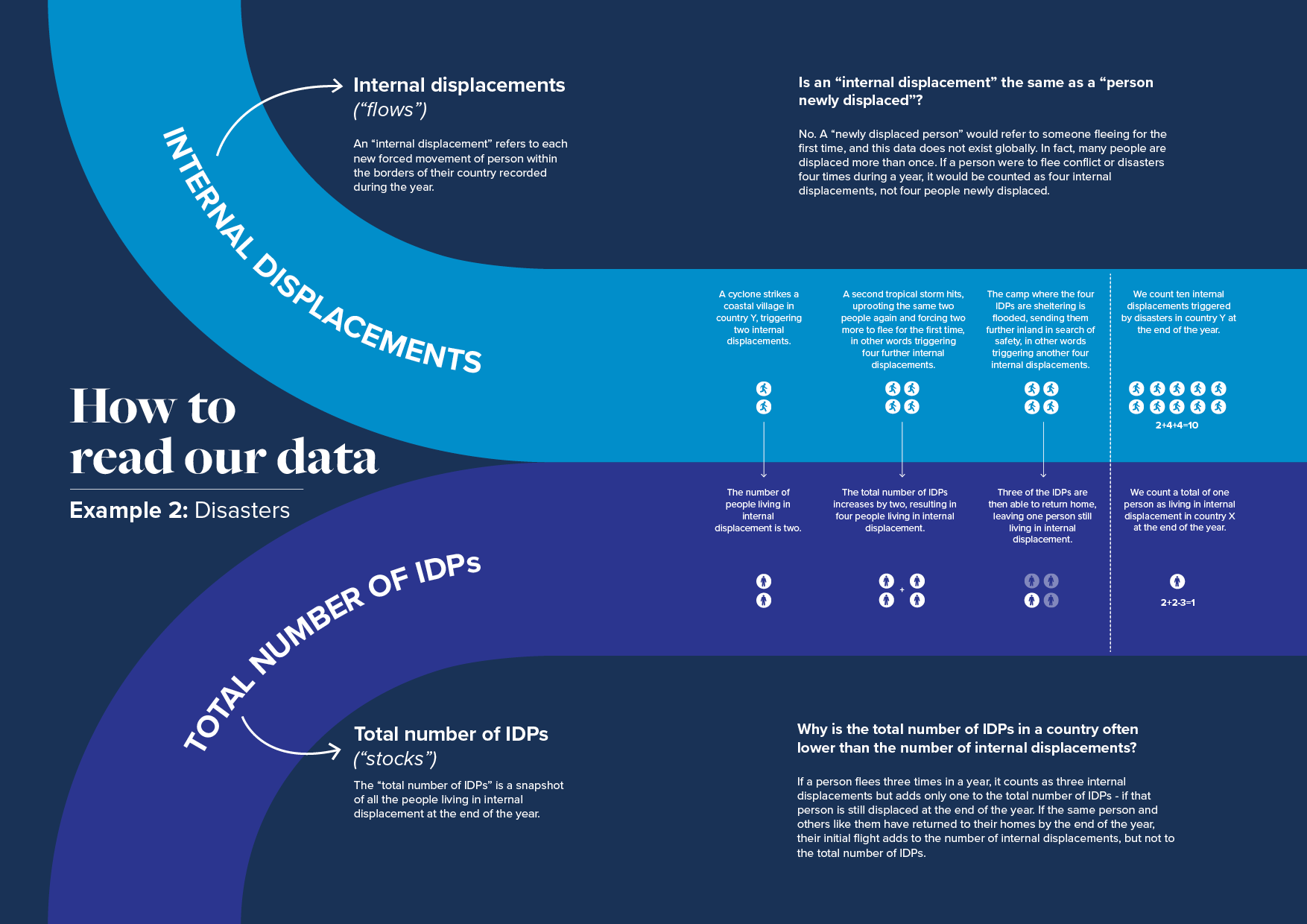 Conflict, violence and disasters triggered 38 million internal displacements across 141 countries and territories in 2021, the second highest annual figure in a decade after 2020's record-breaking year for disaster displacement. Conflict and violence triggered 14.4 million movements, an increase of almost 50 per cent on the year before.

Breakdown by conflict and disaster

Sub-Saharan Africa accounted for more than 80 per cent of all internal displacements triggered by conflict and violence worldwide in 2021. The regional total was 4.7 million higher than the figure for the previous year, driven mostly by conflict in Ethiopia, the Democratic Republic of the Congo (DRC), Burkina Faso, Somalia and the Central African Republic (CAR).

Most of the new and repeated displacements triggered by disasters in 2021 were recorded in the Asia and Pacific regions, which together accounted for about 80 per cent of the total. Tropical cyclones, monsoon rains and floods hit highly exposed areas that are home to millions of people. The most affected countries were China, the Philippines and India.

Conflict and violence triggered 11.6 million internal displacements in sub-Saharan Africa in 2021, the highest figure ever recorded for the region. New waves of violence in eastern Africa and escalating tensions and conflict in the central Sahel and Lake Chad regions accounted for most of the movements, but violence also led to displacement in southern and central Africa, most notably in CAR, DRC and Mozambique. Foreign military activity also influenced displacement and return trends in a number of countries.

Disasters triggered 2.6 million displacements, fewer than in 2020. Floods were less intense and widespread, accounting for about 60 per cent of the total, compared with 98 per cent the previous year. Volcanic activity, drought, storms, earthquakes, and wildfires accounted for the remaining 40 per cent. Some disasters displaced people in areas already coping with the impacts of conflicts and violence, and these overlapping crises pushed millions of people into acute food insecurity. Many countries recorded their worst ever levels, including famine conditions.

There were 27.2 million people living in internal displacement across the region as a result of conflict, violence and disasters at the end of the year, an increase of 3.1 million on the figure for 2020. IDPs came under attack in several countries, forcing some to flee again, increasing their vulnerability and impeding humanitarian access. These concerning trends are a reminder of the urgent need to scale up efforts to address and reduce internal displacement in the region.

A number of countries have adopted promising practices. These include the life-saving evacuation of people before disasters strike, and better tracking of the duration of displacement with the aim of providing more tailored responses for those affected. Government-led return operations also took place in at least five countries. These positive developments, however, face a number of challenges.

Conflict and violence triggered one million internal displacements in the Middle East and North Africa (MENA) in 2021, less than half of the 2.1 million recorded the previous year and the lowest figure for the region in a decade. The decrease was mainly the result of de-escalating conflict in Iraq, Libya and Syria. These countries continued to experience instability, however, and violence increased in Yemen. Conflict also reignited in Gaza in May, triggering more than 117,000 displacements, and violence led to small-scale displacements in Lebanon and Israel. Across the region as a whole, the number of people living in displacement at the end of the year as a result of conflict and violence was largely unchanged from 2020 at 12.3 million.

Disasters also triggered fewer internal displacements in 2021 at 233,000, the lowest figure since 2018. Floods accounted for most at 178,000, followed by earthquakes and storms. The trend toward lower figures, however, should be read with caution. The region was affected by severe drought during the year, which caused water scarcity and wildfires from Algeria to Iran, but no countries were monitoring associated displacement systematically, which means the overall figures are conservative. As of the end of the year, around 49,000 people were living in displacement as a result of disasters across the region.

East Asia and the Pacific

Disasters triggered 13.7 million internal displacements in East Asia and the Pacific in 2021, the highest figure since 2016 and above the annual average for the last decade of 11.6 million. As in previous years, the region accounted for the majority of disaster displacements recorded worldwide. It is home to most of the world’s population, many of whom live in areas prone to a wide range of hazards including storms, floods, earthquakes and volcanic eruptions.

The effects of La Niña manifested across different countries for the second year in a row. Storms hit the South Pacific and East and South-East Asia, triggering more than eight million displacements, the vast majority in the form of pre-emptive evacuations. Floods prompted around 5.3 million. Flooding was particularly intense in China, where one event in Henan province in July triggered around 1.5 million displacements.

Conflict and violence led to 626,000 internal displacements across the region, three times the figure for 2020 and the highest since 2017. This was mostly the result of escalating conflict in Myanmar, particularly after the military takeover in February. Around 448,000 displacements were recorded, the highest figure ever for the country but still a conservative estimate. The conflict also overlapped with disasters, further aggravating the humanitarian situation. About 2.8 million people were living in internal displacement in East Asia and the Pacific as of the end of the year, 896,000 of them as a result of conflict and violence.

Disasters trigger most of the internal displacement that takes place in South Asia each year, and 2021 was no exception. Nearly 5.3 million disaster displacements were recorded during the year, a relatively high figure globally but lower than the region’s decade average of 6.2 million. The decrease was partly the result of a weaker monsoon season.

Conflict and violence also accounted for more than 736,000 displacements, the vast majority of which took place in Afghanistan. As US and NATO troops began their final withdrawal and the Taliban clashed with government forces, insecurity and deteriorating humanitarian conditions triggered 723,000, the highest figure ever recorded for the country.

Disasters were the main trigger of internal displacements in the Americas in 2021, accounting for nearly 1.7 million, more than half of which were the result of storms and floods. The region was also significantly affected by wildfires and geophysical hazards. The availability and accessibility of data vary significantly between countries, which plays a role in the trends discussed below. Smaller-scale disasters tend to go unreported, but they should not be ignored given their impacts on local communities, particularly in Latin America and the Caribbean.

Conflict and violence triggered 381,000 displacements, mostly in Colombia and Central America, and a surge in criminal violence led to the highest figure ever recorded for Haiti. We also obtained data on displacement due to violence in Brazil for the first time, but here as elsewhere in the region the information compiled is unlikely to reflect the full reality as in many countries this type of displacement is not collected systematically.

Disasters triggered 276,000 internal displacements in Europe and Central Asia in 2021. The most significant included wildfires in the Mediterranean, storms and flooding in western and central Europe and a volcanic eruption in Spain’s Canary Islands.

Violence prompted at least 61,000 internal displacements, the highest figure for the region since 2016. Two days of border clashes between Kyrgyzstan and Tajikistan accounted for 56,000 or just over 90 per cent of the total. Very few displacements were recorded in Ukraine in 2021, but Russia’s military offensive in February 2022 has led Ukraine to become the largest and most rapidly evolving internal displacement situation in the world.

Children and youth in internal displacement

Around 25.2 million of the world's IDPs are under the age of 18 and the effects of their displacement go well beyond their immediate safety, wellbeing and education. A healthy and happy child is more likely to contribute to an equitable society and a functioning economy.

More data is needed to better understand these broader and longer-term impacts, but it is clear that protecting and supporting displaced children and young people not only safeguards their rights, but also contributes to a more stable future for all.

The number of people living in internal displacement worldwide has reached an all-time high. The unprecedented figures presented in this report are fuelled by both new and protracted conflicts, particularly in Africa and the Middle East. Millions more have fled their homes in Europe in recent months as the war in Ukraine evolves into the largest displacement crisis in the world. Disaster displacement continues to represent a significant global challenge with its impacts being felt in every corner of the world

Behind the data are millions of lives disrupted, communities torn apart, and children deprived of their future. The impacts of displacement not only place a heavy toll on children today, but also on future generations. We must look beyond the direct and immediate consequences on young people to better understand how these are connected to longer-term impacts on communities and societies. In the meantime, recognising children and youth as agents of change is vital to protecting development gains and reducing the risk of future displacement.

In their own words 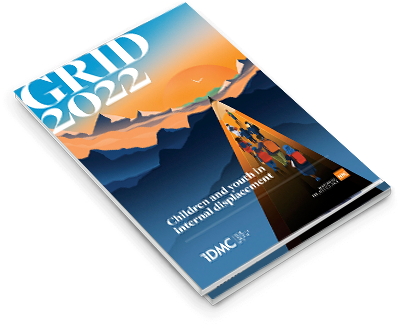 Or select a section 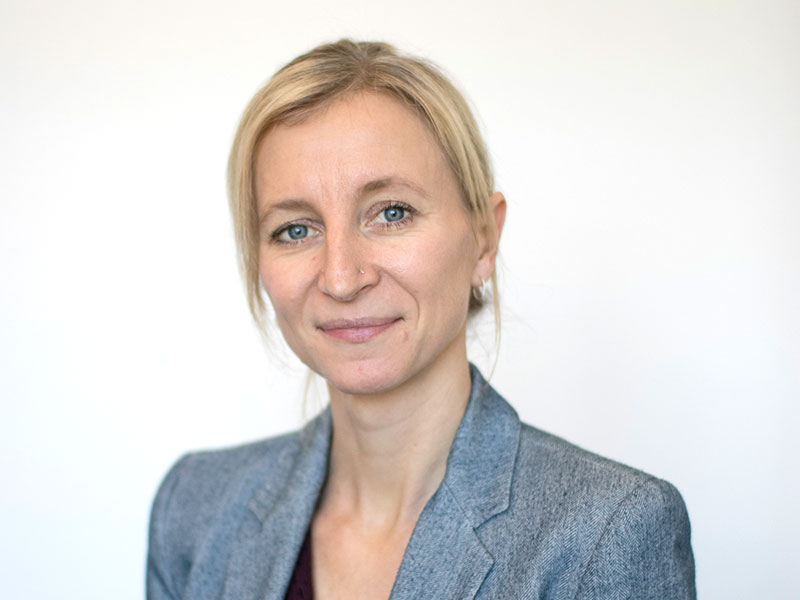 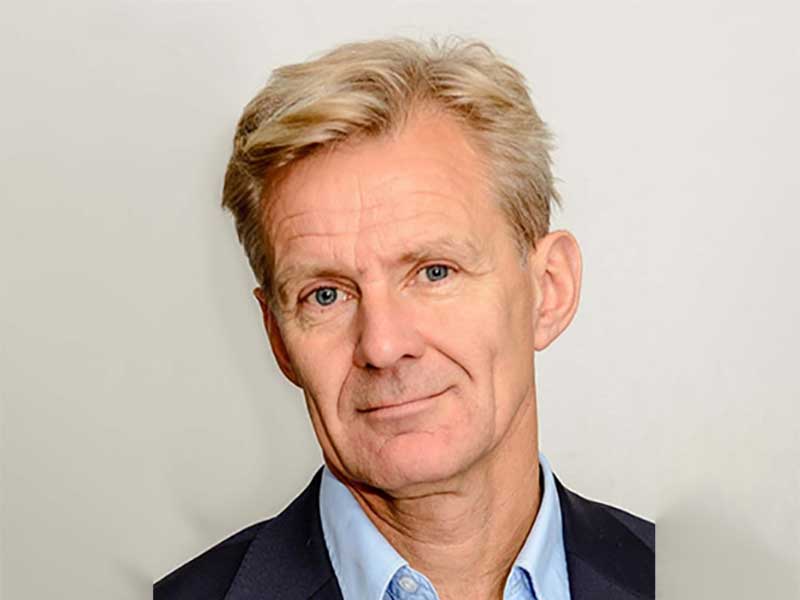 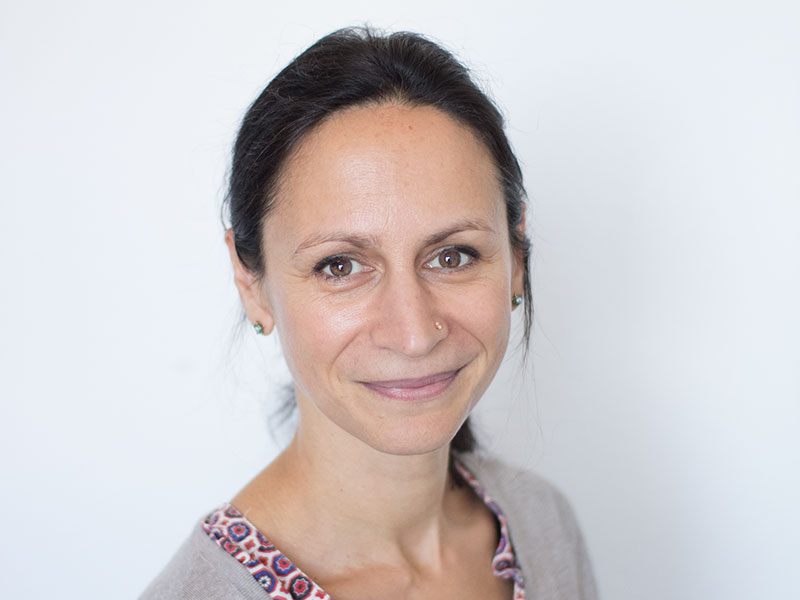 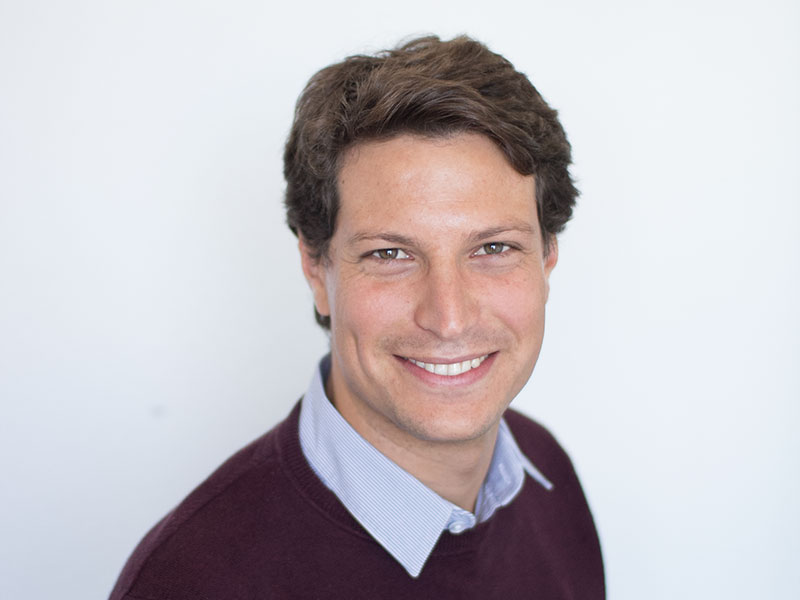 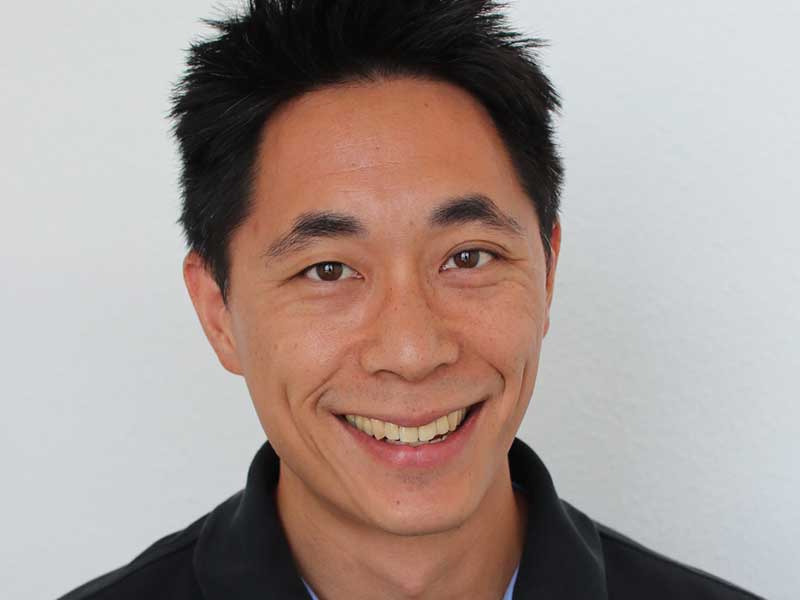 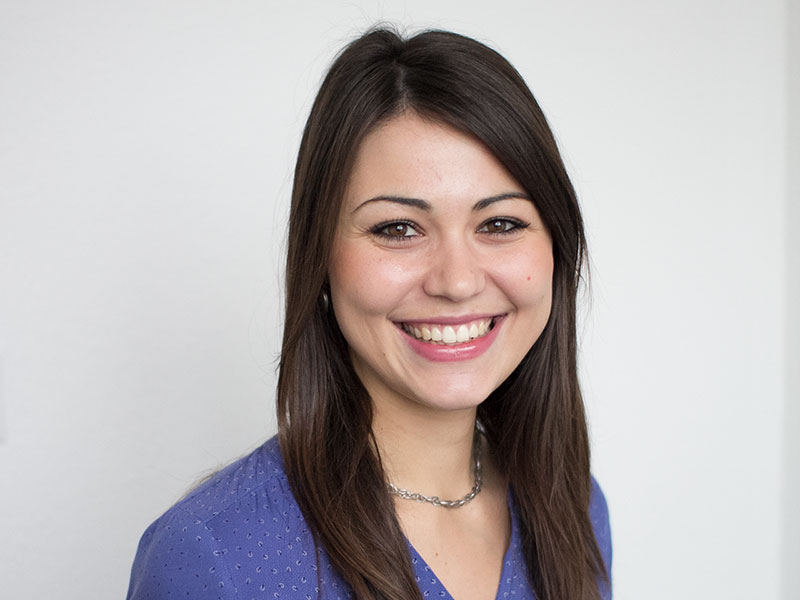 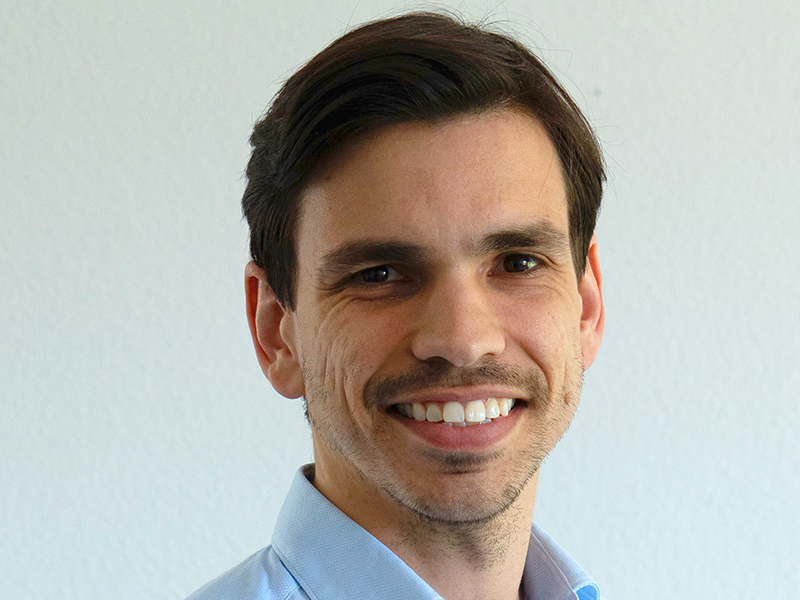 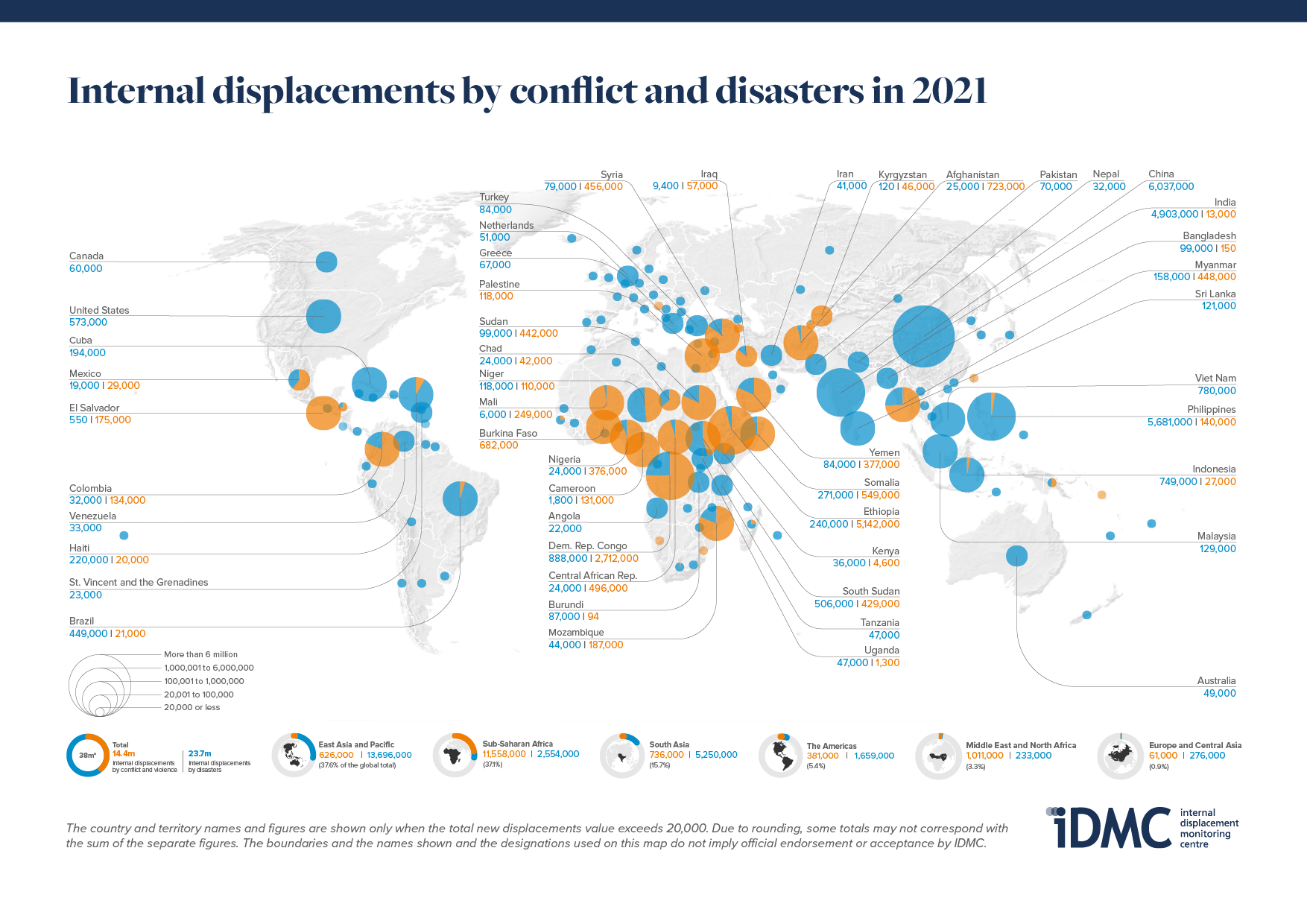 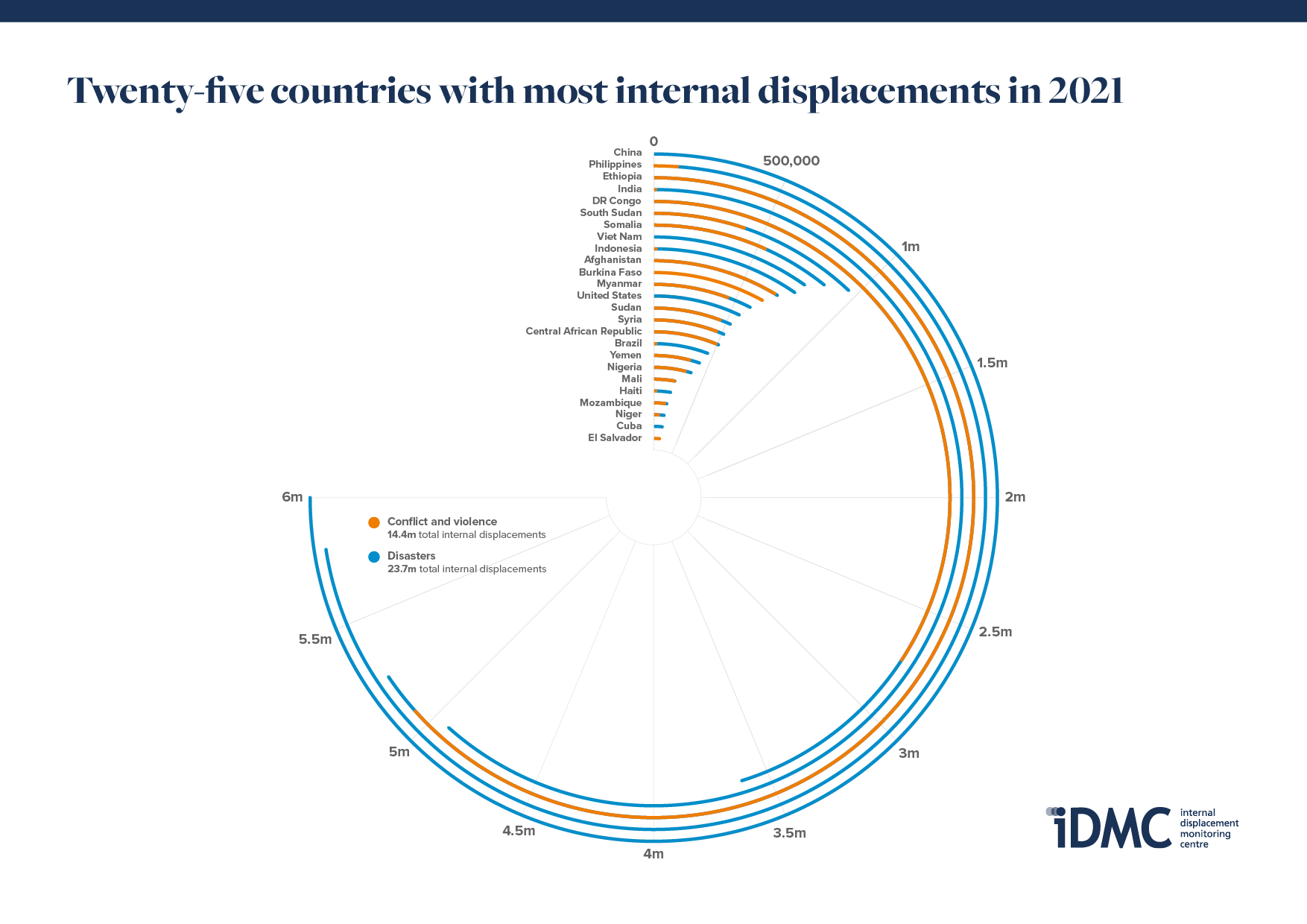 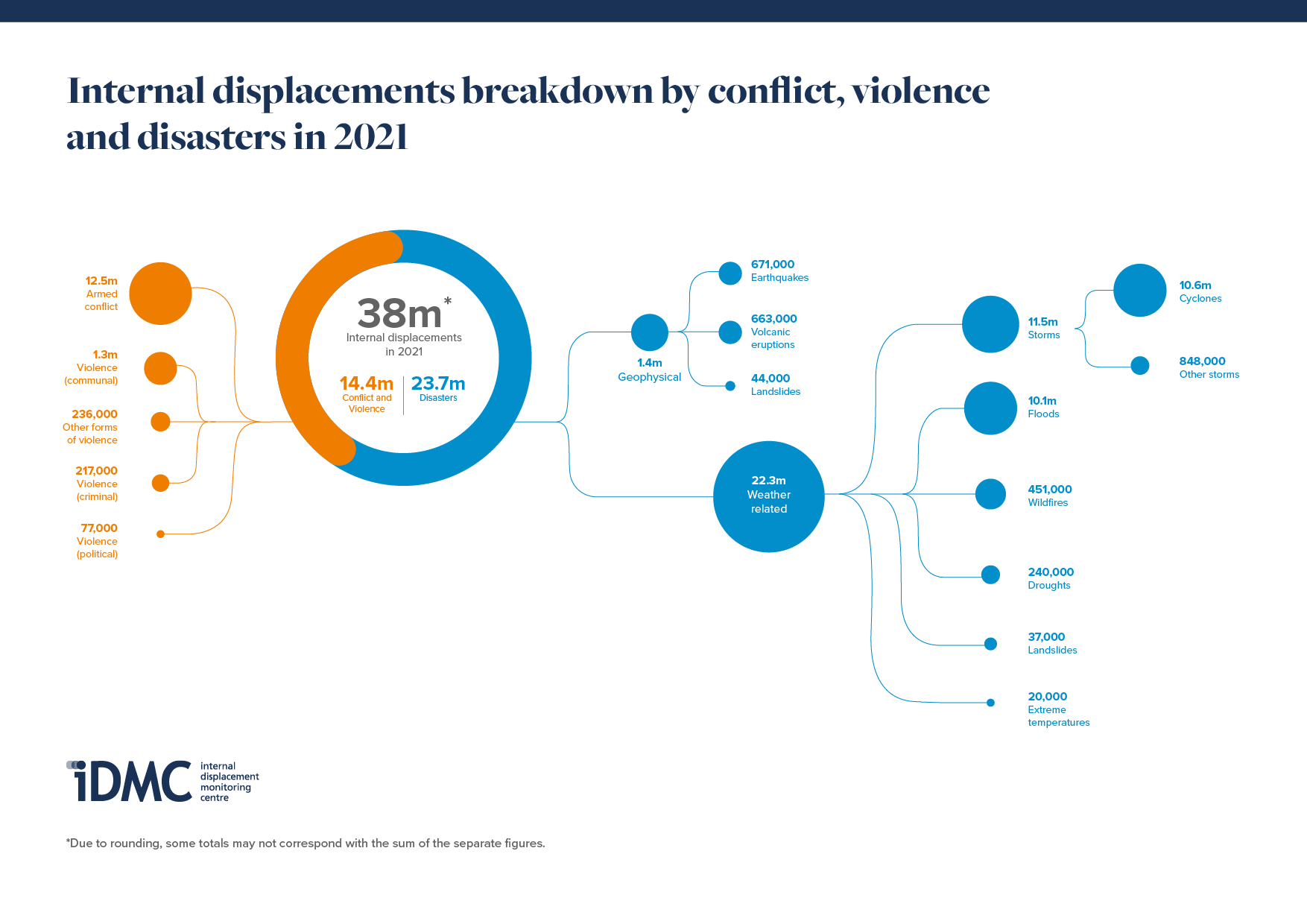 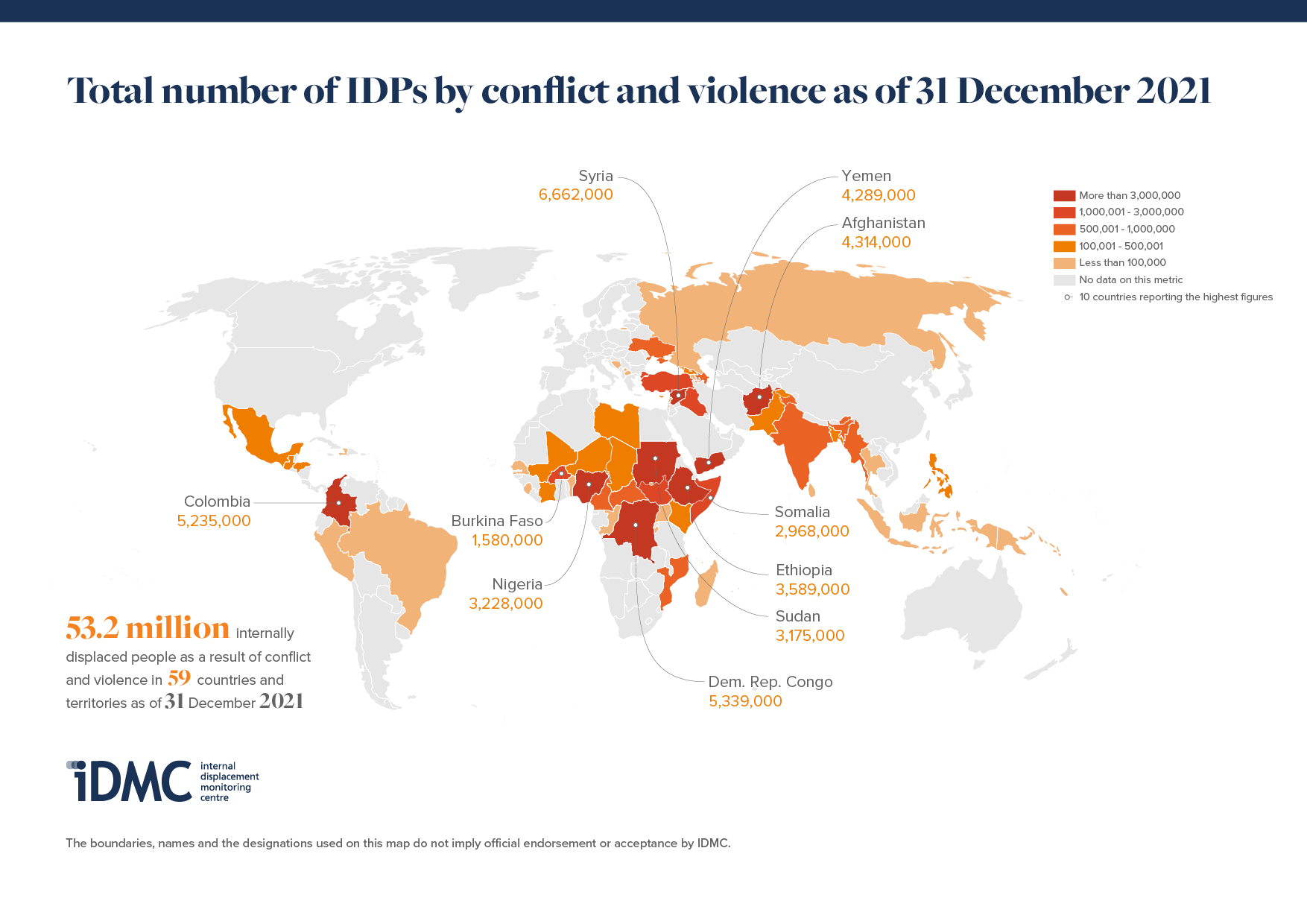 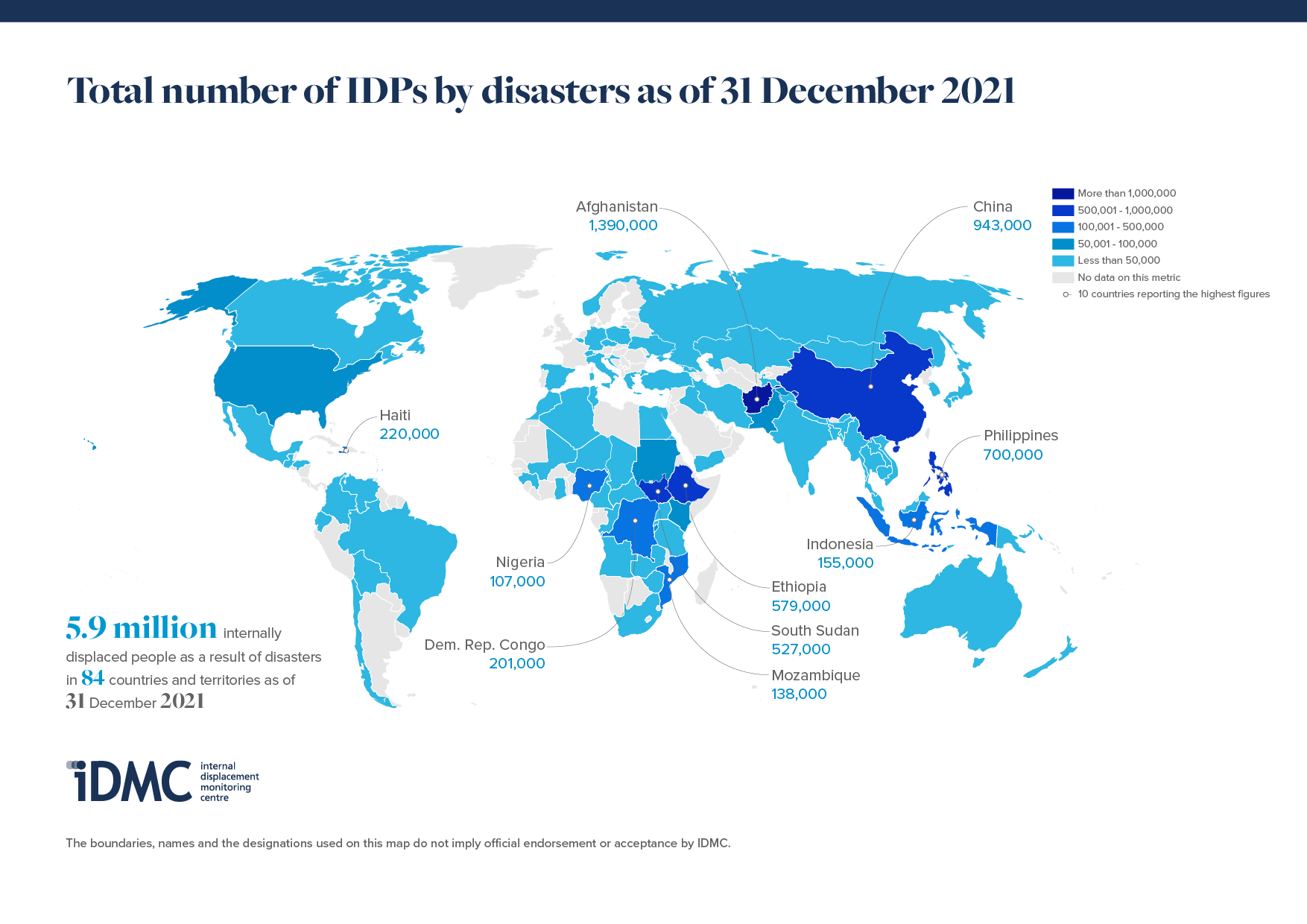 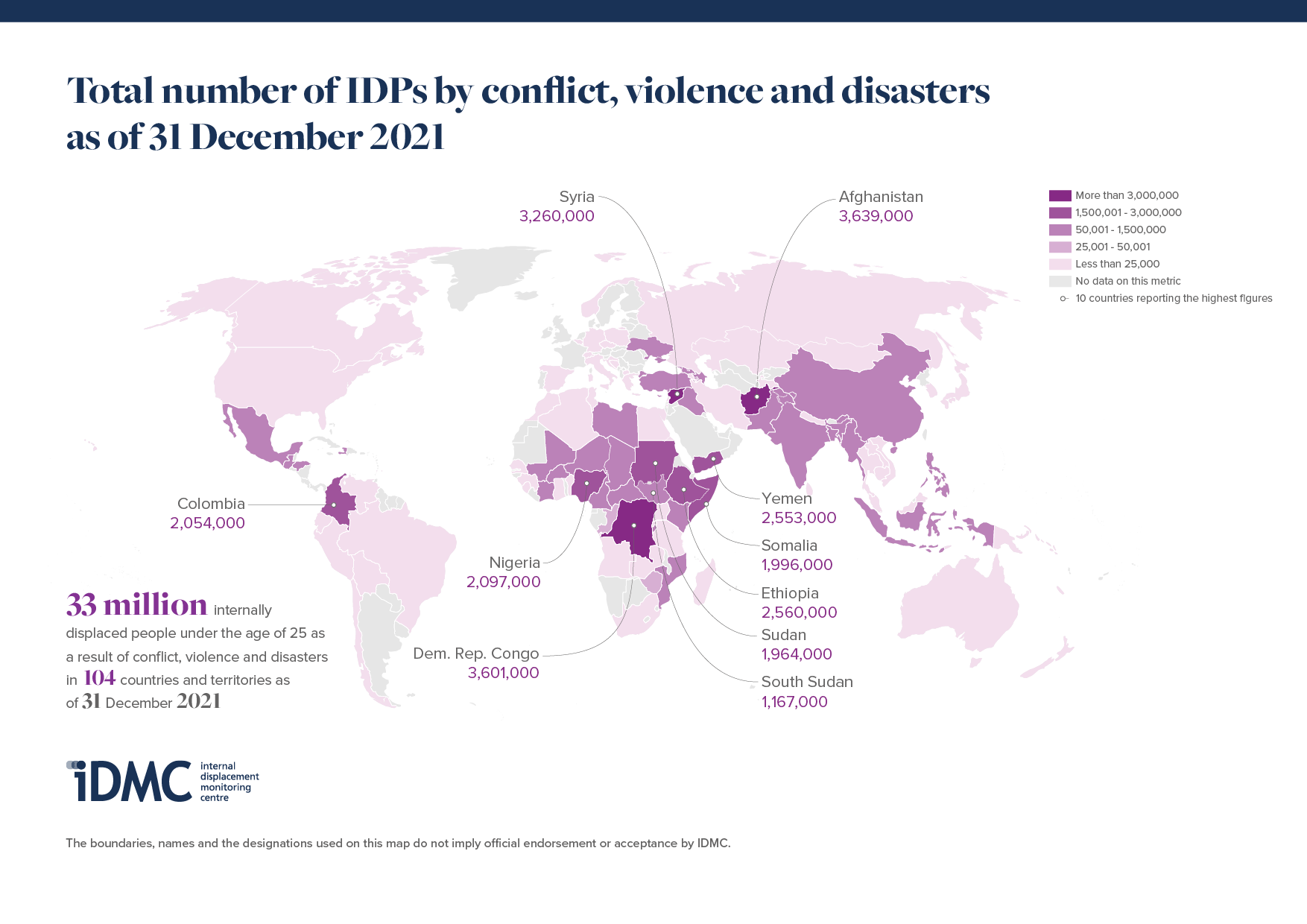